South Africa captain Quinton de Kock was named man of the match after he slammed 70 off 47 balls. 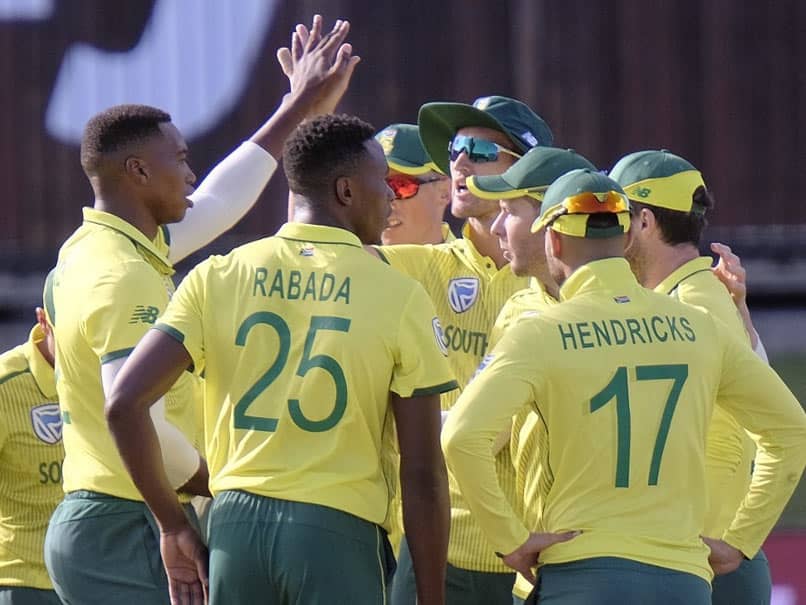 South Africa defended a modest total of 158/4 to win by 12 runs and level the 3-match series.© AFP

South Africa's bowlers held their nerve as the hosts bounced back from a record defeat to win the second Twenty20 international against Australia at St George's Park on Sunday. Opening batsman David Warner hit an unbeaten 67 for Australia but it wasn't enough as South Africa defended a modest total of 158 for four to win by 12 runs and level the three-match series. Australia lost three wickets for eight runs in the last 2.1 overs to finish on 146 for six. It was their first T20 defeat in nine matches going back to November 2018.

South Africa captain Quinton de Kock was named man of the match after he slammed 70 off 47 balls to get the home team off to a blazing start as they set out to recover from a record 107-run defeat in the first match in Johannesburg on Friday.

He hit two sixes in the second over, bowled by Pat Cummins, and raced to 50 off 31 balls.

Warner, Aaron Finch and Steve Smith got Australia off to a similarly fast start but both teams found scoring increasingly difficult on a slow pitch with low bounce as the ball lost its shine and hardness.

"We realised the new ball is really key with the bat," said De Kock. "It gets more difficult towards the end so we were trying to capitalise on the powerplay.

"We thought 160 was par because we know this wicket. It was always going to be more difficult towards the end."

South Africa scored 59 runs for no wicket in the six-over power play and Australia responded with 54 for one.

Warner and Smith, both on their first tour of South Africa since serving a one-year ban for ball-tampering, kept Australia on target before Smith was caught by a diving Faf du Plessis at mid-on for 29 with the total on 98 in the 13th over.

Fast bowlers Lungi Ngidi, Kagiso Rabada and Anrich Nortje each took a wicket and bowled tight last overs in a tense finish, with Warner unable to get enough of the strike to get his team across the line.

"I thought we were on track for most of the chase but we didn't get that kick at the end which we needed," said Australian captain Finch.

"South Africa bowled beautifully and they executed brilliantly under pressure."

The series decider takes place on Wednesday at Newlands in Cape Town, the scene of the ball-tampering scandal which led to bans for Smith and Warner.