Ashton Agar took a hat-trick as Australia crushed South Africa by 107 runs in the first Twenty20 international at the Wanderers Stadium on Friday. 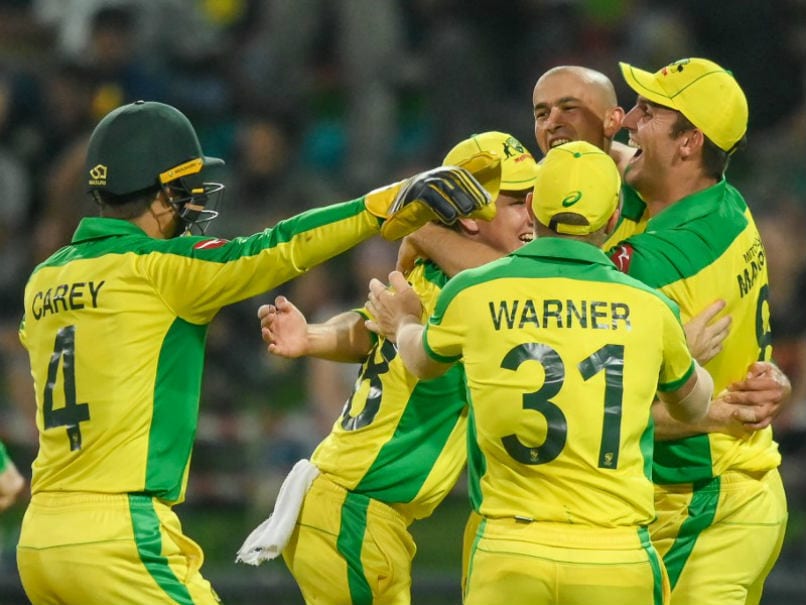 Ashton Agar picked up five wickets for 24 runs in his four-over spell.© AFP

Left-arm spinner Ashton Agartook a hat-trick as Australia crushed South Africa by 107 runs in the first Twenty20 international at the Wanderers Stadium on Friday. Steve Smith, back in South Africa for the first time since the 2018 ball-tampering scandal, hit a top score of 45 for Australia, who made 196 for six after being sent in. South Africa made a bad start against the pace of Mitchell Starc and Pat Cummins before Agar's triple strike sent them hurtling to their all-time lowest T20 total of 89. It was also the host country's biggest defeat in the format. Man of the match Agar finished with career-best figures of five for 24.

"It was really exciting, a highlight of my cricketing life," he said.

But he gave praise to the fast bowling attack of Mitchell Starc, Kane Richardson and Pat Cummins who started South Africa's collapse.

Starc made a crucial breakthrough when he bowled South African captain and batting star Quinton de Kock for two with a fast, swinging delivery in the first over of the home side's reply.

South Africa were reeling at 40 for four when Agar came on to bowl.

He had Faf du Plessis caught at deep cover with his fourth delivery, trapped Andile Phehlukwayo leg before next ball andDale Steyn superbly caught at slip by captain Aaron Finch to complete the hat-trick.

Smith and Finch (42) set up Australia's big total with an aggressive second wicket stand of 80 off 52 balls, benefitting from some loose South African bowling.

"I'm not quite sure what happened," said De Kock. "Their energy was there but the skills weren't good enough."

By contrast Australia's bowlers were on target immediately.

"The way we attacked the crease and bowled a really good, aggressive length was crucial," said Finch.

"We pride ourselves on not giving away width with the new ball and making the batsmen hit good shots off good balls."

It was a successful return to South Africa for Smith, who was stripped of the captaincy and banned for a year after the 'Sandpaper-gate' scandal in 2018.

David Warner, who was also banned for a year for his part in the affair, hit a four off the first ball of the match but was caught at fine leg off the next delivery from Steyn, ending a sequence in which he had scored 267 runs and only been dismissed once in his previous six T20 internationals.

The win extended Australia's unbeaten run in the format to nine matches, with eight wins and one no-result. Their last defeat was in November 2018.

The second match of the series is at Port Elizabeth on Sunday with the third and final game in Cape Town on Wednesday.

Steven Smith Cricket
Get the latest updates on T20 World Cup, check out the T20 World Cup Schedule and Live Score . Like us on Facebook or follow us on Twitter for more sports updates. You can also download the NDTV Cricket app for Android or iOS.