Mohammad Kaif revisited his genius on the field, sharing a video of his brilliant catch against Pakistan in 2004. 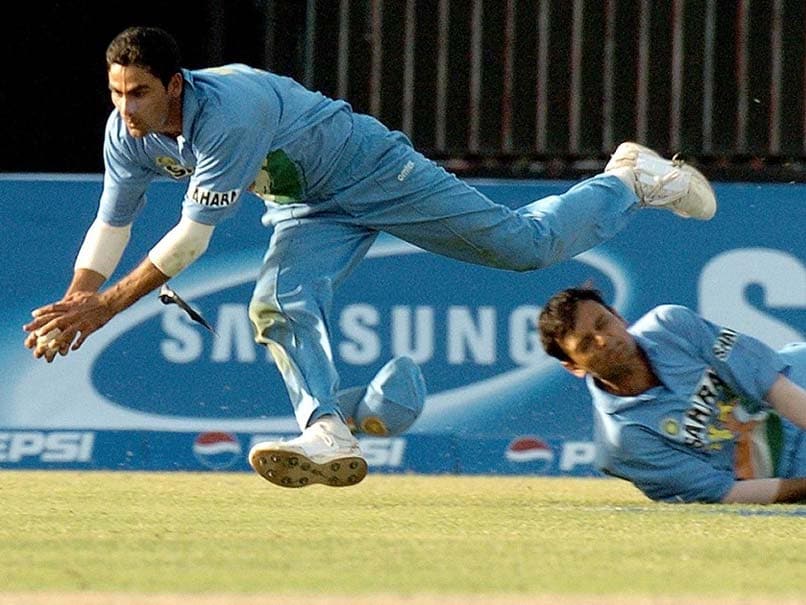 Mohammad Kaif also apologised to Hemang Badani for nearly taking his head off while completing the catch.© AFP

Mohammad Kaif has taken some mind-boggling catches in his career and will go down as one of the best fielders the country has produced. But one effort that has always been a standout was his incredible running catch against Pakistan in Karachi during the 2004 ODI series. Not only was it memorable because of Kaif's brilliant athleticism but also for the impact it had on the game. On Saturday, the former India cricketer revisited his genius on the field, sharing the video on his Twitter handle and writing: "Fearlessness of youth makes you chase the impossible and grab it with both hands."

Fearlessness of youth makes you chase the impossible and grab it with both hands. Oops sorry Badani bhai. pic.twitter.com/Yn3yxJ1JEK

In the first ODI of the five-match series during India's tour of Pakistan in 2004, fans witnessed a gripping encounter with the visitors coming up trumps by the narrowest of margins -- 5 runs.

Winning the toss and putting India into bat, Pakistan bowlers were blown away by a monster batting performance from the visiting side. Virender Sehwag smashed 79 off 57 balls to give India a brilliant start.

Rahul Dravid scored 99 off 104 balls while Sourav Ganguly (45) and Mohammad Kaif (46) also made key contributions as India powered their way to a mammoth 349 for seven.

Pakistan's difficult task only got tougher when they found themselves at 34 for two in the 8th over. However, Inzamam-ul-Haq (122) and Mohammad Yusuf brought their team back from the dead with a quite brilliant 135-run stand.

After Yusuf's departure, Inzamam found another willing partner in Younis Khan and the duo stitched another century partnership to send alarm bells ringing in the Indian camp.

Abdul Razzaq's 27-run blitz put Pakistan within touching distance. With the hosts in the driver's seat, needing just 10 runs off the final 8 deliveries, up stepped Kaif.

Shoaib Malik skied one towards long on and Kaif ran from long off at full speed, stretched full length and grasped the ball with both hands -- nearly taking teammate Hemang Badani's head off in the process -- to give India hope.

India got the important wicket of Malik and it also brought a new man to the crease.

That proved to be the game-changer as Pakistan crumbled under pressure, unable to score the required 9 runs off the final over.