Big Bash League, Sydney Sixers vs Brisbane Heat: Sean Abbott took a blinder to dismiss Chris Lynn in what is being hailed as the "Catch Of The Summer". 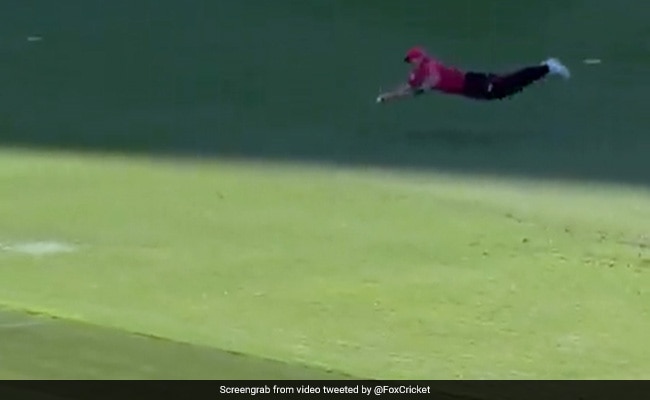 Sydney Sixers' Sean Abbott took the world of cricket by storm as he grabbed a stunner to dismiss a visibly shocked Brisbane Heat batter Chris Lynn in the Big Bash League. Abbott pulled off a screamer as he dived full length to his right at extra cover to complete the catch and put the entire crowd, including the players, in utter disbelief. This catch is being hailed as the "catch of the summer." Lynn charged pacer Ben Dwarshuis and hit a delivery towards the extra cover region. While the crowd and the cameraman looked towards the fence to sight the ball, an elated Abbott ran towards his teammates with the ball in hand and a huge smile on his face.

Catch of the summer? 🤯 Chris Lynn could NOT believe it... #BBL11

This 'Oh What a Feeling' Moment brought to you by @Toyota_Aus pic.twitter.com/6fGBa3l5D0

The match being played at the Sydney Cricket Ground (SCG) turned out to be a low-scoring encounter.

Brisbane Heat were restricted to only 105 runs in 19.1 overs after a disciplined bowling effort by the Sixers.

Apart from being a live wire on the field, Abbott returned to haunt the batting side with a four-wicket haul in four overs and giving away only 31 runs.

Chasing 106 runs for a win, Sixers started in the worst possible way as they lost four wickets inside the first six overs.

However, Abbott made the headlines once again as he returned to star with the bat with a well-calculated unbeaten 37-run knock that helped Sixers register a close two-wicket victory on the very last ball of the match.

Chris Lynn Cricket
Get the latest updates on ICC Women's Cricket World Cup 2022 and IPL 2022, check out the Schedule , Live Score and IPL Points Table. Like us on Facebook or follow us on Twitter for more sports updates. You can also download the NDTV Cricket app for Android or iOS.