ICC used a picture of former umpire Steve Bucknor to point out the front foot no ball. 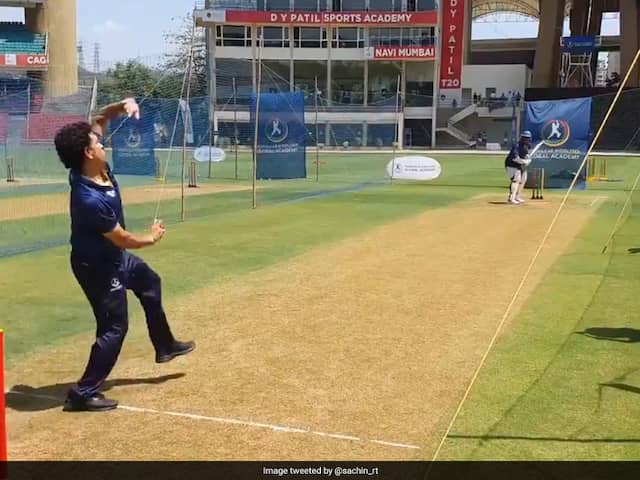 The International Cricket Council (ICC) on Sunday pointed out cricket legend Sachin Tendulkar's front foot no-ball, which he bowled during a net session at the DY Patil Stadium in Mumbai. The cricket's global governing body's tweet came in response to Sachin Tendulkar's post, in which he can be seen having a bowl at the nets. ICC used a picture of former umpire Steve Bucknor along with a screengrab from Sachin Tendulkar's twitter video, which gave a clear depiction of the front foot no-ball. Apart from having a bowl, the 46-year-old also had a bat at the net session which was set up for the Tendulkar Middlesex Global Academy.

Tendulkar and English county Middlesex joined forces to launch an academy to teach young girls and boys about the sport, earlier in July 2018.

The children aged between nine and 14 will be put through a comprehensive cricket curriculum at the "Tendulkar Middlesex Global Academy" (TMGA).

"The academy will provide young girls and boys between the age of 9 and 14 an opportunity to learn from two of the most respected and renowned institutions in world cricket - Sachin Tendulkar and Middlesex Cricket," read a joint statement.

"The comprehensive training curriculum developed by the professional coaches at Middlesex and the Master himself will help young and budding cricketers with various aspects of cricket, including insights into athletic development, sport psychology, tactical development and technical modifications.

"With talent identification at the core of the academy, TMGA will also provide opportunities for talented underprivileged children with 100 scholarships available."

Tendulkar, regarded as one of the greatest batsmen of all time having accrued the most runs in international cricket, said the ambition for the academy was two-fold.