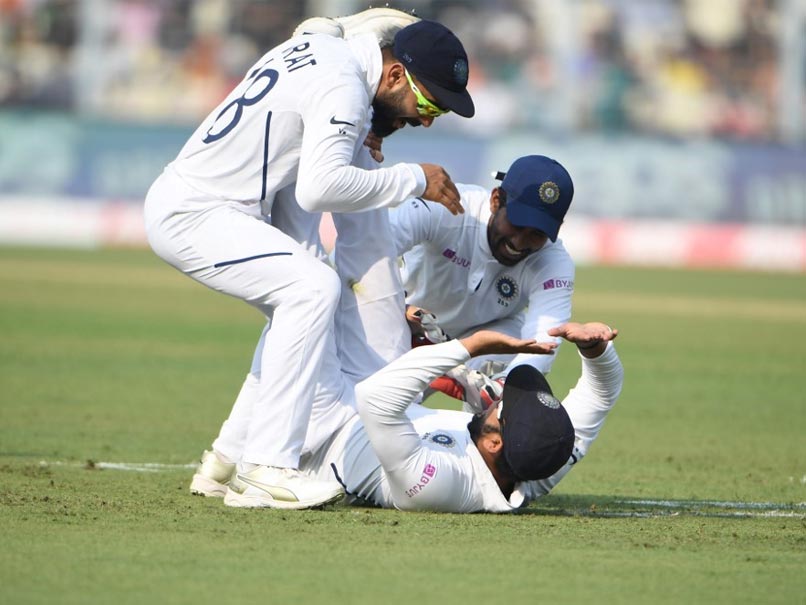 Rohit Sharma, who is in the form of his life with the bat, proved to be an absolute live-wire in the slip cordon on Day One of the ground-breaking day-night Test between India and Bangladesh in Kolkata on Friday. The opening batsman took a mind-blowing one-handed catch at second slip to remove Bangladesh captain Mominul Haque early in the day. In the 11th over of the match, Haque tried to defend against Umesh Yadav but the ball found a thick outside edge of the bat. The ball was flying towards captain Virat Kohli stationed at first slip but Rohit Sharma had different plans. Rohit was alert enough to fly to his right and caught the ball one-handed in front of the first slip.

Has to be the catch of the year, diving full length Rohit Sharma catches a stunner. #INDvsBAN pic.twitter.com/Mh4KtCkbCO

Gonna tell our kids this was the original Superman.#RohitSharma #INDvBAN pic.twitter.com/6G6h1mRFBg

Earlier, Mominul Haque won the toss and elected to bat in front of a sell-out crowd.

"The wicket is dry and hard, so that's why we want to bat first," Mominul said at the toss.

"It's a brave decision we feel. It's a great opportunity for everyone."

India have made no changes to the team that won the Indore Test inside three days.

"We would have batted first as well. Decent grass cover on it, but it's a hard pitch," Kohli said at the toss.

"With the pink ball there will be something for the first 15 overs. This is another opportunity for us to come and execute our skills.

"The challenge is to adapt quickly to the ball. It travels fast and it's difficult to control. We are fulfilling a responsibility of debuting with the pink ball."

Virat Kohli Cricket India vs Bangladesh, 2nd Test
Get the latest updates on ICC Women's Cricket World Cup 2022 and IPL 2022, check out the Schedule , Live Score and IPL Points Table. Like us on Facebook or follow us on Twitter for more sports updates. You can also download the NDTV Cricket app for Android or iOS.