Rohit Sharma and Shikhar Dhawan were prolific with the bat in the Super Four clash against Pakistan. 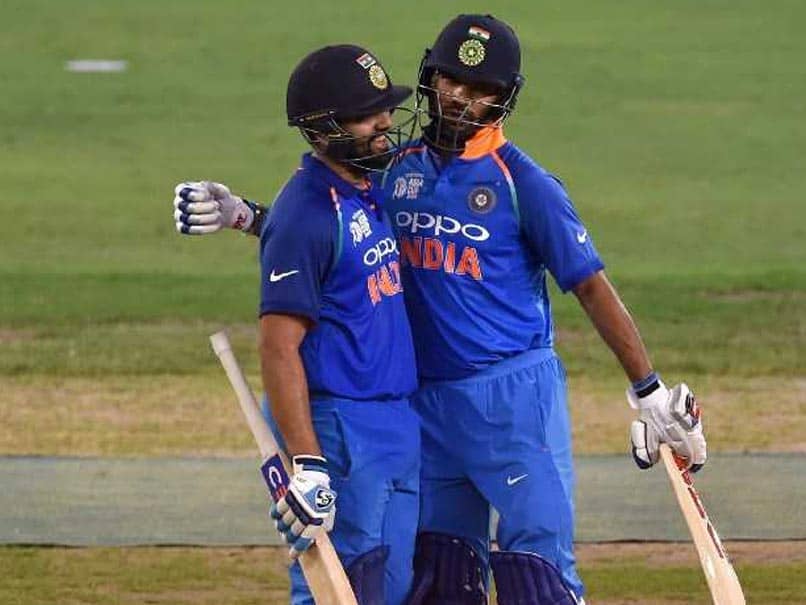 Rohit Sharma and Shikhar Dhawan were unstoppable against Pakistan© AFP

Rohit Sharma and Shikhar Dhawan hit fine centuries on Sunday against Pakistan in their Asia Cup Super Four clash in Dubai. Rohit Sharma brought up his 19th ODI century while Shikhar Dhawan scored his 15th ODI ton. Chasing 238 runs, both Indian openers Rohit Sharma and Shikhar Dhawan looked solid right from the outset in India's run-chase. Dhawan was the more aggressive of the two as he slammed 15 fours and a solitary maximum en route his fiery century. Dhawan eventually was run-out for 104 after the two openers stitched a 210-run opening partnership. With their 210-run partnership, Rohit and Dhawan surpassed Virender Sehwag-Rahul Dravid (201-run partnership) to become the second highest
partnership for India-Pakistan match for any wicket. Sachin Tendulkar-Navjot Sidhu top the list with their 231-run partnership in Sharjah, 1996. While batting on 94, Rohit also scored 7000 ODI runs.

Congratulations on your 100s @ImRo45 and @SDhawan25. Such clean hitting! Always a joy to watch you both in full flow. #INDvPAK pic.twitter.com/yxzFEGtDak

Ton and dusted! Two massive tons that made this win look too easy! Hats off @ImRo45 and @SDhawan25#PAKvIND #AsiaCup2018

After winning the toss and electing to bat, Pakistan were once again short of a fighting total as they managed 237-7 in their 50 overs despite an attractive half-century by Shoaib Malik. Malik scored a 90-ball 78 with four boundaries and two sixes, but India kept a tight check on Pakistan's progress.

Pakistan lost Imam-ul-Haq (10), Fakhar Zaman (31) and Babar Azam (9) in an unimpressive start to their innings before Malik and skipper Sarfraz Ahmed added 107 for the fourth wicket. Sarfraz scored a slow 66-ball 44 with only two boundaries before he became one of two Kuldeep Yadav's wicket who finished with 2-41.

Pakistan's final over score depended on Malik who crucially fell in the 44th over, caught behind off a leg-side edge off Jasprit Bumrah. Asif Ali smashed two sixes in his 21-ball 30 before he was bowled by leg-spinner Yuzvndra Chahal who took 2-38 in his nine overs. Bumrah finished with 2-29 in his ten overs.