Rajeev Shukla spoke of a meeting, attended by the IPL captains and match referee, where it was decided "if non striking batsman steps out bowler as a courtesy will not run him out". 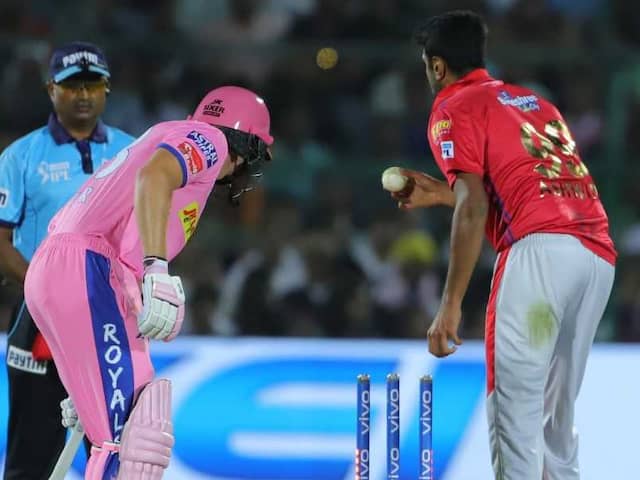 Ravichandran Ashwin sparked a massive controversy after 'mankading' Jos Buttler during the RR vs KXIP IPL 2019 match at the Sawai Mansingh Stadium in Jaipur on Monday night. The Kings XI captain received a lot of flak on social media platforms from former and current players for his actions with IPL chairman Rajeev Shukla also weighing in on the contentious issue. However, Shukla's tweet only served to further the debate with some fans slamming the IPL chairman for his "courtesy" comment.

Following the controversy in Jaipur, Shukla took to Twitter and spoke of a meeting, attended by the IPL captains and match referee, where it was decided "if non striking batsman steps out bowler as a courtesy will not run him out".

While some fans called on Shukla to take action against Ravichandran Ashwin for his "unsportsmanlike" conduct, others slammed the IPL chairman for trying to make the tournament a "courtesy".

Here are some of the tweets from fans:

Dear sir, rule is changed, m sure you are aware of it.. It's game of cricket not a game of courtesy..

Should have been conveyed to the Umpires too.

Players, captains n match referees can't make up their own rules as they go along. Everyone obeys the laws of cricket.

Second thought. By This tweet I feel IPL is legally fixed, loses the cricket originality. If it sportsmanship why are there rules, if it's rule why batsmen are not aware it?

Sir, as a courtesy, debutant batsman should be allowed to bat twice; a young bowler should not be hit for more than 6 runs per over...

Take strict action against him for thus humongous blunder man

It was so bad on part of Ashwin to run Butler out.....much against the spirit of the game.

The incident took place in the 13th over with Rajasthan Royals coasting to victory -- needing 77 off 43 balls with nine wickets in hand. Ashwin paused while delivering the ball and took the bails off at the non-striker's end while Buttler was backing up.

The on-field umpire immediately signalled for the decision to be taken by the third umpire, who decided to give Buttler out.

A visibly fuming Buttler and Ashwin exchanged a few words in the middle, before the Englishman walked off the field, shaking his head in disbelief.

Kings XI Punjab went on to restrict Rajasthan Royals to 170 for nine in the chase to register a 14-run win.

MS Dhoni IPL 2019 Rajasthan Royals vs Kings XI Punjab, Match 4 Cricket
Get the latest Cricket news, check out the India cricket schedule, Cricket live score . Like us on Facebook or follow us on Twitter for more sports updates. You can also download the NDTV Cricket app for Android or iOS.