Ravichandran Ashwin kicked up a storm on Twitter after 'mankading' Jos Buttler during RR vs KXIP IPL 2019 match in Jaipur. 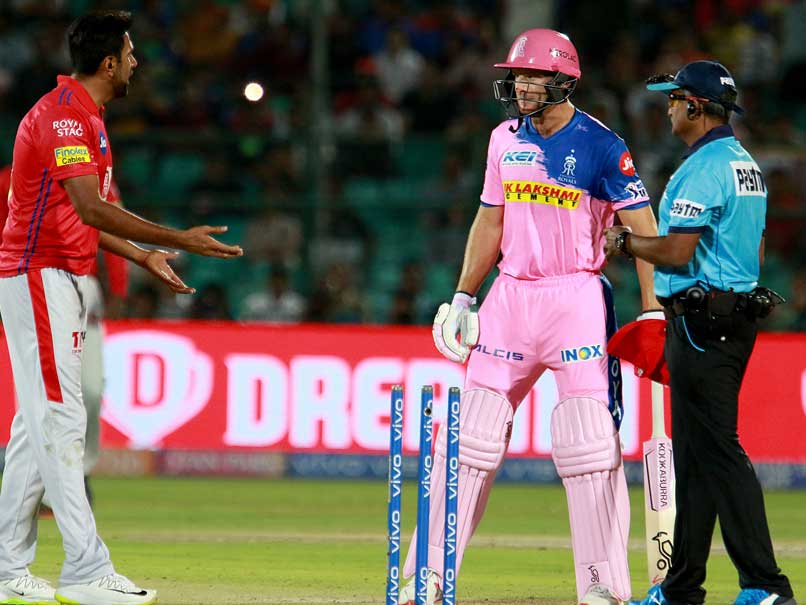 Ravichandran Ashwin, Kings XI Punjab skipper, 'mankaded' Jos Buttler, inflicting a massive blow on Rajasthan Royals in their chase of 185 runs at the Sawai Mansingh Stadium, Jaipur, on Monday night. Jos Buttler had given Rajasthan Royals a flying start in their run-chase and looked unstoppable after scoring his seventh half-century in the Indian Premier League (IPL). However, spinner Ravinchandran Ashwin put an end to Buttler's stay at the crease with one of the most controversial dismissals ever seen in the history of the IPL. After Ravichandran Ashwin dismantled the bails, Punjab made an appeal for 'mankading'.

The Punjab captain exchanged a few words with Buttler, who was clearly out of the crease. The spinner paused before delivering the ball and took the bails off. The third umpire gave the England batsman out.

Kings XI Punjab went on to register a 14-run win over Rajasthan Royals, who were restricted to 170 for nine in the chase.

"You are not in the crease and you've been upsetting my rhythm," an animated Ashwin said in the heat of the moment.

Buttler, who didn't get any warning before, was furious while walking back to the dressing room.

While some lauded Ashwin's smart dismissal on Twitter, many called it "cheating".

I can't believe what I'm seeing!! @IPL Terrible example to set for young kids coming through. In time I think Ashwin will regret that.

Former England captain Michael Vaughan joined in saying: "If @josbuttler had been warned well that's fine ... if he hasn't and it's the first time I think @ashwinravi99 is completely out of order ... watch how often this happens from now on !!!!!!!"

If @josbuttler had been warned well that's fine ... if he hasn't and it's the first time I think @ashwinravi99 is completely out of order ... watch how often this happens from now on !!!!!!! #IPL

So disappointed in @ashwinravi99 as a Captain & as a person. All captains sign the #IPL wall & agree to play in the spirit of the game. RA had no intention of delivering the ball - so it should have been called a dead ball. Over to u BCCI - this a not a good look for the #IPL

What an absolute disgrace! @josbuttler spitting tacs and rightfully so!!! #RRvsKXIP

Oh Ravi Ashwin just mankad Jos Buttler. But he stopped in his run up and Buttler was in#VIVOIPL #RRvKXIP pic.twitter.com/nF5lBfHF1C

Earlier, Chris Gaylescored a half-century to guide Kings XI Punjab to a challenging 184 for four in their allotted 20 overs. He scored 79 off 47 balls and hit eight boundaries and four sixes in the process.

Ravichandran Ashwin IPL 2019 Rajasthan Royals vs Kings XI Punjab, Match 4 Cricket
Get the latest updates on IPL 2021, check out the IPL 2021 Schedule and Indian Premier League Live Score . Like us on Facebook or follow us on Twitter for more sports updates. You can also download the NDTV Cricket app for Android or iOS.