This was Pakistan's 14th win in as many T20 internationals against Zimbabwe, and are now fourth in the international T20 rankings. 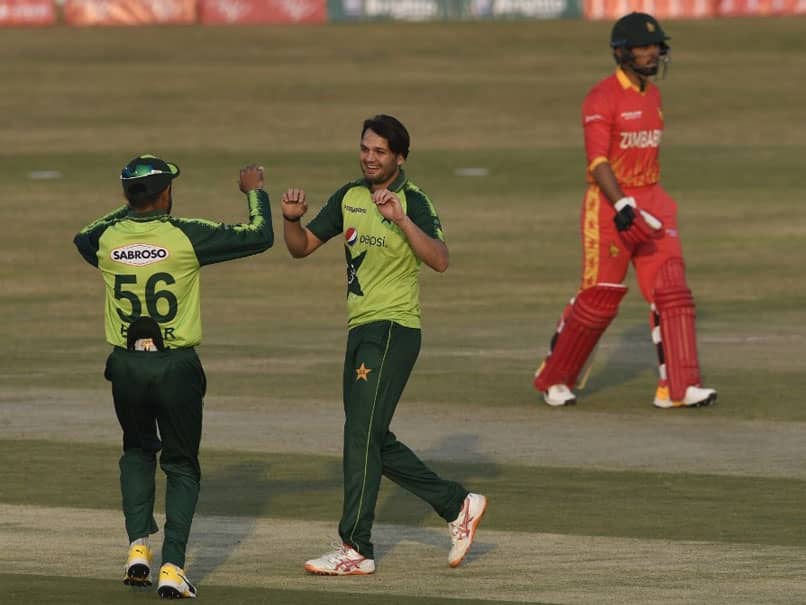 Leg-spinner Usman Qadir grabbed four wickets to guide Pakistan to a 3-0 whitewash of Zimbabwe with an eight-wicket victory in the third Twenty20 International (T20I) in Rawalpindi on Tuesday. The 27-year-old Qadir -- son of the late star spinner Abdul Qadir -- finished with 4-13 from four mesmerising overs to restrict Zimbabwe to a paltry 129-9 in 20 overs. That proved a walk in the park for the home team, which cruised to victory in 15.2 overs losing just two wickets. Pakistan lost Fakhar Zaman (21) and Haider Ali (27) but debutant Abdullah Shafique top-scored with 41 and saw Pakistan home with Khushdil Shah (36 not out).

Khushdil hit a six off Faraz Akram to bring up victory.

This was Pakistan's 14th win in as many T20 internationals against Zimbabwe, and are now fourth in the international T20 rankings.

Zimbabwe allrounder Elton Chigumbura was accorded a warm farewell by his teammates, but he scored just two runs in his last international match.

An emotional Qadir acknowledged his father's contribution in his career.

"It was quite emotional to remember my father," he said of Abdul Qadir, who died in September last year.

"He played a key role in my career and I was remembering him with every wicket I got because they are all for him."

Abdul Qadir took 236 Test and 132 one-day international wickets in a glorious career between 1977-93.

Pakistan skipper Babar Azam was all praise for Usman Qadir.

"We gave chances to a number of players in both the series," said Azam, whose team won the preceding three-match one-day series 2-1.

"It's good to see him taking wickets and he will bowl better in future. Every win gives confidence so that's an important win for us."

"It's not ideal to lose 3-0 and we are disappointed," said Chibhabha. "Still, there are a few positives with some young players coming to the fore and with more exposure our team will get better."

Earlier, the visitors, who won the toss and batted, were derailed by Qadir, who recorded the third-best figures by a Pakistani bowler against Zimbabwe in T20s.

The home team won the first match by six wickets and the second by eight.

Chibhabha hit three boundaries and a six in his 28-ball knock, the highest of the innings.

Zimbabwe Cricket Team Pakistan vs Zimbabwe, 3rd T20I Cricket
Get the latest updates on IPL 2021, IPL Points Table , IPL Schedule 2021 , live score . Like us on Facebook or follow us on Twitter for more sports updates. You can also download the NDTV Cricket app for Android or iOS.