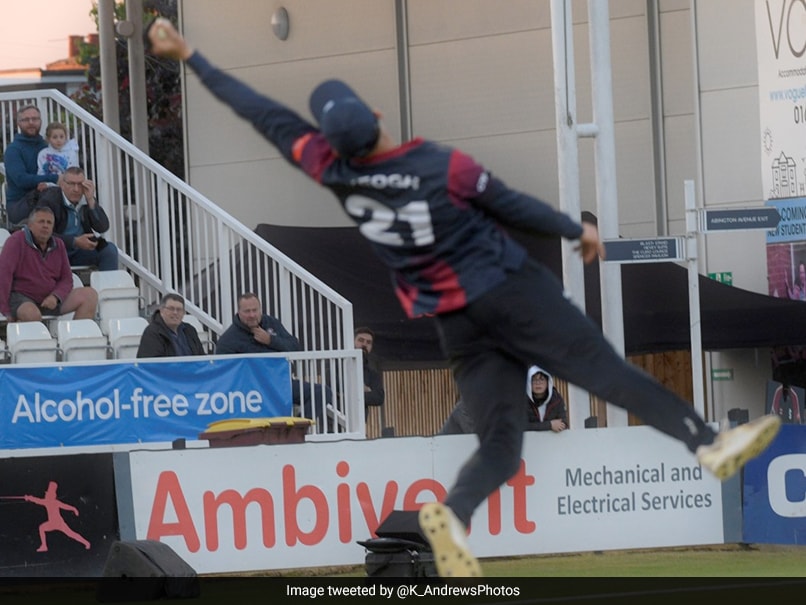 A stupendous fielding effort rarely goes unnoticed on the cricket field. However, what England's Rob Keogh achieved for Northamptonshire Steelbacks in their T20 Blast match against Leicestershire Foxes was much more than that. His one-handed effort to dismiss Rishi Patel off Chinaman bowler Freddie Heldreich was so brilliant that the Vitality T20 Blast tweeted: "Quite possibly one of the best catches you'll ever see @RobKeogh91, take a bow." The catch happened in the 12th over of the match. With Leicestershire chasing a huge target of 228, their No. 5 right-handed batter Rishi Patel went for an expansive hoick off Heldreich.

The ball looked like sailing over deep mid-wicket until Keogh intervened. He outstretched himself and took a brilliant catch to dismiss Patel.

Quite possibly one of the best catches you'll ever see @RobKeogh91, take a bow #Blast22 | @NorthantsCCC pic.twitter.com/Qh0fM4NQ1x

Earlier, Chris Lynn played a brilliant knock for Northamptonshire Steelbacks, hitting the third T20 century of his career. Lynn scored 106* off 66 balls with 12 fours and three huge sixes as Northamptonshire ended with 227/1.

New Zealand's Jimmy Neesham also made an unbeaten 75 off just 30 deliveries. He hit six sixes on his debut for the Steelbacks. He and Lynn put up 118 in just 53 balls.

In reply, Foxes opener Scott Steel scored 64 off 45 balls. However, Heldreich and medium-pacer Ben Sanderson picked three wickets as the Foxes could manage 185/9 in 20 overs.

Neesham also featured in the recently-concluded Indian Premier League (IPL) 2022. He was part of the Rajasthan Royals squad. Though he did not get a game, Royals went on to play the final. They lost to Gujarat Titans in the title clash. In 2021, Neesham played for five-time champions Mumbai Indians, who were being led by Rohit Sharma. The New Zealand allrounder got chance in the playing XI in just three matches in 2021.

James Neesham Cricket
Get the latest updates on IPL Auction 2023 and check out  IPL 2023 and Live Cricket Score. Like us on Facebook or follow us on Twitter for more sports updates. You can also download the NDTV Cricket app for Android or iOS.