New Zealand vs Bangladesh, 1st Test, Day 1: Devon Conway smashed a century on Saturday and received a standing ovation from his teammates. 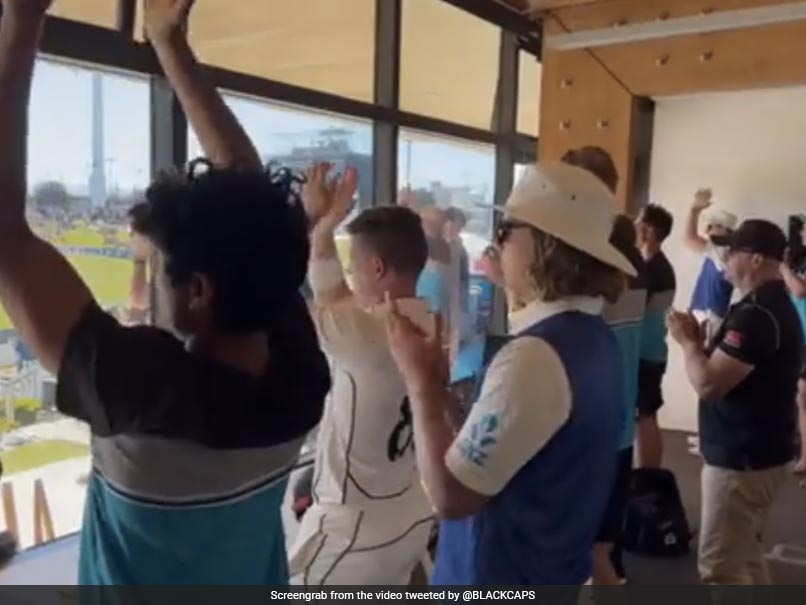 NZ vs BAN, 1st Test, Day 1: Devon Conway received a standing ovation from his teammates for his ton.© Twitter

Devon Conway was in stunning form during his fine knock in the ongoing first Test match between New Zealand and Bangladesh in Mount Maunganui. With Bangladesh electing to bowl on Day 1, New Zealand put in a good start despite the early loss of opener Tom Latham (1). Latham's opening partner Will Young kept his nerve alongwith Conway and bagged a half-century (52 runs off 135 balls) before departing in the 49th over. Meanwhile, Conway kept up the pressure and went on to register a century in the 66th over. In the third delivery of the over, Conway pulled a short delivery by Taskin Ahmed down to fine-leg for a single, then took off his helmet and raised his bat to celebrate his ton. Such was the impact of the century that his teammates stood up in the dressing room to give him a standing ovation. The New Zealand cricket team took to social media to share a video of the moment:

That Devon Conway moment from the viewing area #NZvBAN pic.twitter.com/dUlxUuinnE

Here is a video of the single which got the 30-year-old his century on New Year's Day:

Devon Conway! A single to go to a 100 in his first Test in New Zealand. A special way to start 2022. Follow play LIVE with @sparknzsport. #NZvBAN pic.twitter.com/BHVNhjgmLE

Conway went on to smash 122 off 227 balls, and also clattered 16 fours and a six. He lost his wicket in the 80th over after edging a delivery to wicketkeeper Liton Das.

New Zealand ended Day 1 after posting 258 for five in 87.3 overs at Stumps and Henry Nicholls will resume batting on Day 2.

Nicholls has already registered 32 runs in 63 balls and will be hoping to build on his knock on Sunday. He also bagged five fours on Day 1. Ross Taylor also played a small but important cameo, adding 31 runs to the scoreboard before losing his wicket in the 67th over.

Shoriful Islam has been in decent form for Bangladesh and bagged two wickets in 20 overs, conceding 53 runs. Meanwhile, Ebadat Hossain and Mominul Haque have registered a dismissal each.

Bangladesh Cricket Team Devon Conway New Zealand vs Bangladesh, 1st Test Cricket Social
Get the latest updates on ICC Women's Cricket World Cup 2022 and IPL 2022, check out the Schedule , Live Score and IPL Points Table. Like us on Facebook or follow us on Twitter for more sports updates. You can also download the NDTV Cricket app for Android or iOS.