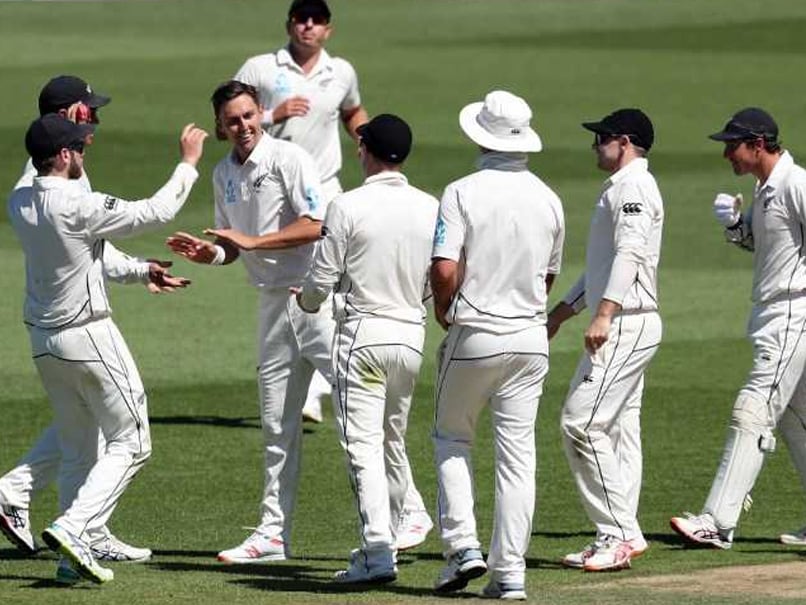 Trent Boult finished with five for 123 and Tim Southee took three for 98.© AFP

Defiant centuries from Soumya Sarkar and Mahmudullah were in vain as Trent Boult's five-wicket haul gave New Zealand a crushing victory over Bangladesh in the first Test by an innings and 52 runs in Hamilton on Sunday. After the stubborn double-century partnership took Bangladesh 361 for four in their second innings, Boult opened the final chapter of the Test when he bowled Soumya for 149. It ended a 235-run stand with Mahmudullah for the fifth wicket and the Test was all over 68 runs later, just after tea on day four.

Soumya made 149, his maiden century, in a heroic partnership with Mahmudullah who was the second to last batsman removed for 146, his fifth and highest century.

The pair put on 235 for the fifth wicket only to be trumped by Boult's lethal spell after the second new ball was taken.

The match had belonged to New Zealand long before they declared their first innings at a colossal 715 for six -- a first innings lead of 481 -- but Soumya and Mahmudullah were determined to make crossing the finish line as difficult as possible for the hosts.

They batted together for more than 54 overs and produced the sixth best partnership by a Bangladesh pair.

When Boult finally bowled Soumya, the 26-year-old left-hander stood motionless for several seconds as he realised the significance of his wicket before departing the ground.

When Bangladesh resumed Sunday on 174 for four they faced a Herculean task to score a further 307 just to make New Zealand bat again.

Sri Lanka's Angelo Mathews and Kusal Mendis proved with their (rain-assisted) match-saving 274-run stand in Wellington before Christmas it is possible to defy the odds in New Zealand.

But, Soumya could not hold out that long and when the new ball was taken he lasted 14 more deliveries before Boult ended his resistance and the tenacity left the innings.

Boult finished with five for 123 and Tim Southee took three for 98.

Bangladesh Cricket Team Cricket
Get the latest updates on SA vs IND 2021-22, check out the Schedule and Live Score . Like us on Facebook or follow us on Twitter for more sports updates. You can also download the NDTV Cricket app for Android or iOS.