New Zealand beat Bangladesh by 88 runs in the 3rd ODI to seal a 3-0 series whitewash over Bangladesh. 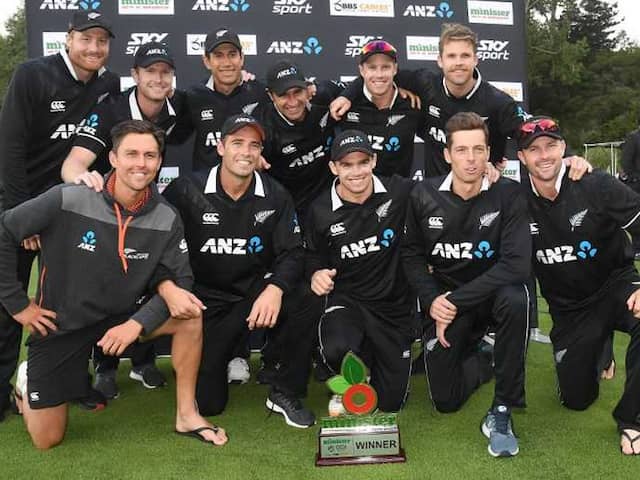 Tim Southee snared a six-wicket haul and Ross Taylor tore up the record books as New Zealand dominated Bangladesh to seal a 3-0 series whitewash with an 88-run victory in the final one-day international in Dunedin on Wednesday. Sabbir Rahman's gallant maiden ODI century saved Bangladesh from total humiliation after they lost three wickets with just two runs on the board chasing New Zealand's imposing target of 331. The tourists were 242 all out in 47.2 overs after the Black Caps were sent into bat and made 330 for six at University Oval.

It was final New Zealand outing before the Cricket World Cup 2019 and players were desperate to impress coach Gary Stead even though the fixture was a dead rubber.

Paceman Tim Southee, overlooked in New Zealand's past six ODIs, took six for 65 to guarantee himself almost certainly a berth at the tournament.

Henry Nicholls looks to have secured an opening batting slot with a sparkling 64, but out-of-form rival Colin Munro was dismissed for eight.

"Henry's shown he's a versatile player for us... he's a key component of our batting line-up," Black Caps coach Gary Stead said, adding that Munro might make the trip as injury cover.

Ross Taylor became New Zealand's highest-scoring one-day international batsman as his 69 off 81 balls took him past 8,000 runs in th 50-over format.

'Got a few years left'

"I definitely would have taken that when I played my first match donkey's years ago," he said.

"If you play long enough I guess these records come along but it's nice to set the bar for the next guy.

"I'm still enjoying myself and hopefully I've still got a few years in me."

Tom Latham pressed his claim for a World Cup spot with a solid 59 while Colin de Grandhomme and Jimmy Neesham both scored 37 as they seek all-rounder berths.

Bangladesh made a horror start to the run chase when Tim Southee claimed a trio of top-order wickets in his opening two overs to leave the visitors reeling on two for three.

The run rate slowed to a crawl after Mushfiqur Rahim and Mahmudullah Riyad departed, each caught by Munro after offering rash shots in pursuit of quick runs.

Resistance finally came in the form of Rahman and Mohammad Saifuddin, who made 44 in a 101-run partnership that added respectability to the scoreboard.

Captain Mashrafe Mortaza said Rahman's plucky 102 was one of the highlights of a tough series.

"It's disappointing but we have to come back stronger," he said.

Ross Taylor New Zealand vs Bangladesh, 3rd ODI Cricket
Get the latest Cricket news, check out the India cricket schedule, Cricket live score . Like us on Facebook or follow us on Twitter for more sports updates. You can also download the NDTV Cricket app for Android or iOS.