New Zealand were 451 for four, leading by 217 with six wickets in hand at stumps on Day 2. 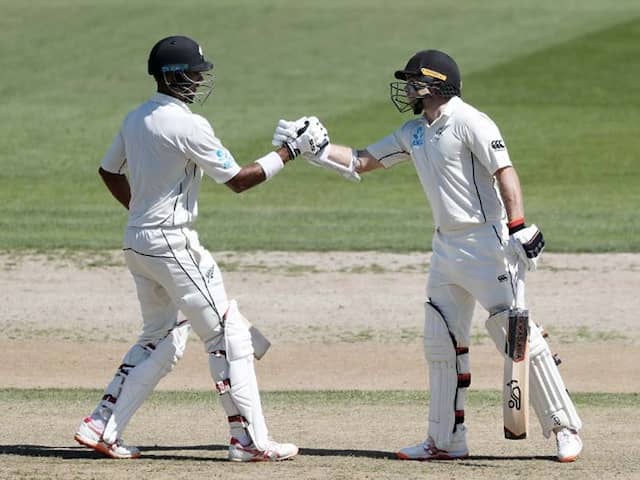 Tom Latham and Jeet Raval put on 254 for the first-wicket.© AFP

Centuries to Tom Latham and Jeet Raval, and the best opening partnership for New Zealand in nearly half-a-century left Bangladesh on the ropes on day two of the first Test on Friday. Kane Williamson, unbeaten on 93, added to the run-fest at Hamilton's Seddon Park in a century stand for the fourth-wicket with Henry Nicholls. At stumps, New Zealand were 451 for four, leading by 217 with six wickets in hand. Latham made 161, Raval notched his maiden century with 132, while Nicholls departed two overs before stumps for 53.

With the assistance of a flat track, Latham and Raval put on 254 for the first-wicket, the third-highest opening partnership by a New Zealand pair and their best since the record 387 set by Glenn Turner and Terry Jarvis against the West Indies 47 years ago.

Latham punished Bangladesh for dropping him before he scored at the start of the innings.

He occupied the crease for more than six hours, scoring freely around the ground and reaching the boundary with 17 fours as well as hitting Mehidy Hasan over the mid-wicket fence three times.

Ironically, it was Soumya Sarkar, who spilled the simple catch at second slip, who eventually claimed his wicket.

But by then, Latham had passed 150 for the fourth time in his career and New Zealand were 333 for two.

It continued a purple patch of form for the left-hander who has three centuries from his past four Test innings.

Raval, frustrated by holding the New Zealand record for the most fifties (eight) without a century, finally got that monkey off his back in his 17th Test.

He held his nerve after passing his previous best, 88 on the same ground against South Africa two years ago, and was able to raise his bat when he cracked back-to-back fours off Ebadat Hossain to move from 93 to 101.

It took a sly switch from Mahmudullah to make the elusive breakthrough.

The Bangladesh skipper brought himself on for one over only and on his fifth delivery, Raval skied an attempted slog-sweep to Khaled Ahmed at mid-wicket.

It was another part-time bowler Soumya who picked up the two wickets of Latham and Ross Taylor.

Latham, who edged a wide delivery to second slip on the second ball he faced, put that stroke away for 246 deliveries before he poked at a wide ball from Soumya and a diving Mohammad Mithun completed the dismissal, also at second slip.

Taylor did not bother questioning his dismissal when a Soumya inswinger rapped on the front pad plumb in line with the stumps.

Against the run of play, Mehidy claimed the late wicket of Nicholls with a ball that came back and crashed into the stumps.

Kane Williamson Cricket New Zealand vs Bangladesh, 1st Test
Get the latest Cricket news, check out the India cricket schedule, Cricket live score . Like us on Facebook or follow us on Twitter for more sports updates. You can also download the NDTV Cricket app for Android or iOS.
Advertisement