Virender Sehwag thanked MS Dhoni for encouraging the students of his school and said that it was a day to remember for all those who were present. 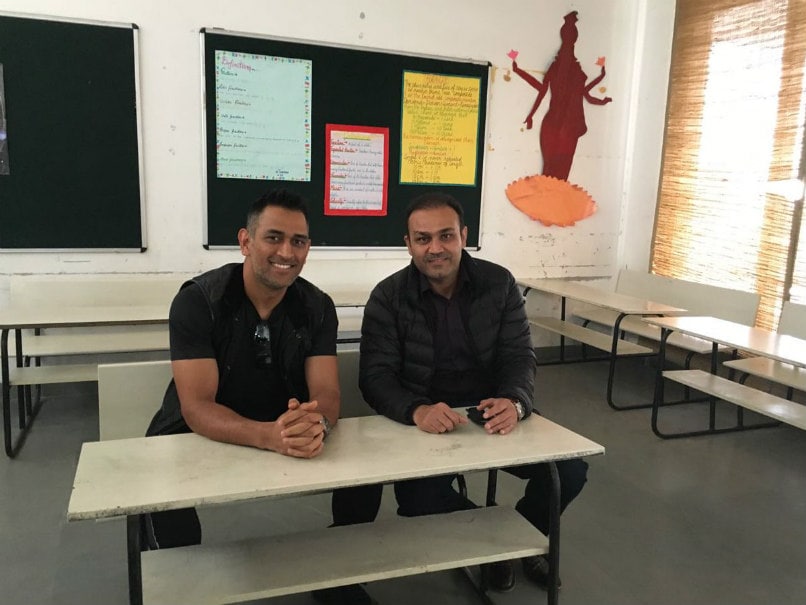 With the burden of captaincy lifted from Mahendra Singh Dhoni's shoulders, the former skipper seems to be enjoying time off the cricket field. Dhoni paid his former teammate Virender Sehwag a visit at the latter's school -- Sehwag International School in Jhajjar, Haryana on Friday. Dhoni shared some of his memories as a school boy and narrated stories of leading India to many memorable victories. He was also seen giving some invaluable wicketkeeping tips to some of the students. Sehwag on his part said he was grateful to the former India captain for his visit.

Sehwag thanked Dhoni for encouraging the students of his school and said that it was a day to remember for all those who were present.

"I'd like to thank you from the bottom of my heart," said the former India opener.

Thank you @msdhoni for encouraging all at @SehwagSchool .A day to remember for everyone who was present for the rest of their lives. pic.twitter.com/iZt79RZThd

What a day for all at @SehwagSchool in the iconic presence of @msdhoni and @virendersehwag . A day to cherish for the rest of their lives. pic.twitter.com/fyvdlmAa3q

Dhoni stepped down as Indian team's limited overs captaincy in January but he remains hugely popular with the Indian cricket fans.

Dhoni turned back the clock in the recently-concluded ODI and T20I series against England when he smashed his first ODI ton since 2013 in Cuttack and registered his maiden T20I fifty in Bengaluru.

India are now slated to play a one-off Test against Bangladesh, starting February 9 and a four-match Test series against Australia, starting February 23. Fans will get to see Dhoni only after a gap when Team India travel to England for the ICC Champions Trophy in June.

Comments
Topics mentioned in this article
India Cricket Team MS Dhoni Virender Sehwag Cricket
Get the latest updates on India vs Australia and check out  Schedule, Results and Live Score. Like us on Facebook or follow us on Twitter for more sports updates. You can also download the NDTV Cricket app for Android or iOS.