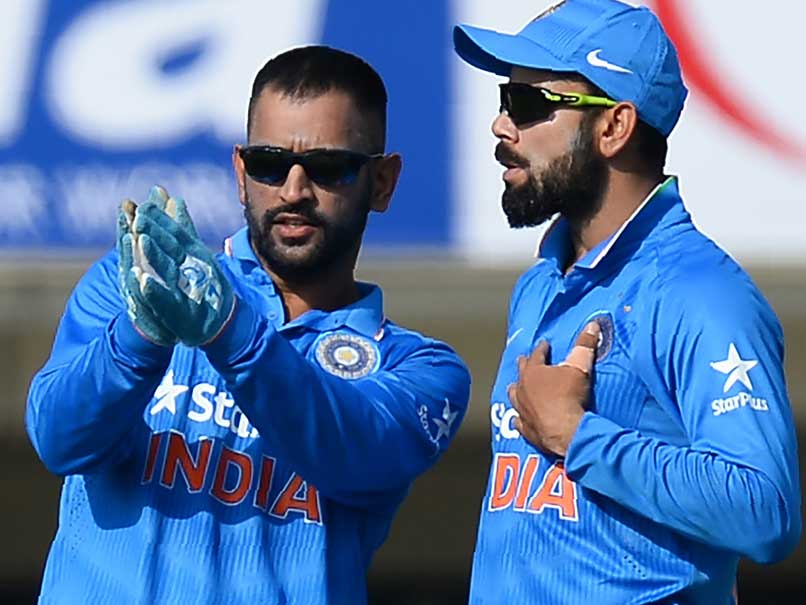 MS Dhoni is like a mentor to Virat Kohli, said the current India skipper.© BCCI

After routing England at home in all three formats of the game, India skipper Virat Kohli said that he is learning the tricks of captaincy from his predecessor Mahendra Singh Dhoni. The Delhi-born said he is benefitting from the immense experience of Dhoni in taking decisions in the limited overs format, which is relatively new for him in terms of leadership. India claimed the Twenty20 International series 2-1 after a comprehensive 75-run win in the third and final game in Bengaluru on Wednesday night.

"Although I have captained in the Test format for a while, ODI and T20 games move very fast. So to take advice from a person (Dhoni) who has captained the side at this level for so long and understands the game really well is never a bad idea in crucial situations," Kohli said.

The young captain disclosed that he wanted Hardik Pandya to bowl after star-performer Yuzvendra Chahal's quota was over but was advised by Dhoni and Ashish Nehra to hand the ball to Jasprit Bumrah, who scalped two wickets in three balls to finish the game.

"Bringing on Bumrah right after that over from Chahal, I was thinking of giving (Hardik) Pandya another over instead. (Dhoni and Nehra) suggested that let's not wait till the 19th over and instead bring on the main bowlers. So these things really help when you are a new captain in the limited-overs format.

"But again, I am not new to captaincy, but there has to be a balance between understanding the skills needed to lead in shorter formats. MS has been helping a lot on that front."

Kohli said the Indian team, which has many yougsters, has made a very fast progress.

"We got the results we wanted. Obviously winning all three series feels really, really good right now because we're up against a top-quality side. We understand that and to come on top after the end of all three series is a great feeling altogether knowing that we didn't have that much experience in our teams.

"The Test team is almost as good as new. Even in the one-day circuit, we have 3-4 experienced guys, but rest of the guys who stepped up are all youngsters, which is, I think, is a massive, massive boost for Indian cricket," he said.

Kohli said the biggest takeaway for winning all three series for the team was the "youngsters were hungry to win matches for the team instead focusing on individual performances."

Kohli said wickets in the middle overs by spinner Yajuvendra Chahal made the job easy for them.

Kohli also said that England's batting collapse will not hamper English players' chances in IPL auction. The visitors lost eight wickets for as many runs to suffer a dramatic slide in the match.

"I don't think the collapse is going to hamper anyone's chances of being picked in the IPL. It all depends, which team wants who, who provides better balance to  whichever franchise they could play for. As I said a lot of them are going to be up for grabs. I can assure you that," he told reporters after the match here at Chinnaswamy stadium.

Unlike earlier years when England players were not available in large numbers at the lucrative IPL auction, the scenario will be different this time, England Captain Eoin Morgan had said at Cuttack recently.

Morgan hoped a lot of English players would be available for the auction and hopefully, they would be picked up and playing the majority of the games.

The auctioning for the 10th edition is scheduled to be held here soon and would be the final one under the 10-year contract. As many as 140 cricketers, including 44 overseas cricketers have been retained by eight IPL franchises.

The window for retention of players closed on December 15 and seven teams except KKR (Kolkata Knight Riders) have retained more than 20 players.

Comments
Topics mentioned in this article
India Cricket Team England Cricket Team MS Dhoni Virat Kohli M.Chinnaswamy Stadium, Bengaluru India vs England 2016-17 Cricket
Get the latest updates on ICC T20 Worldcup 2022 and CWG 2022 check out the Schedule, Live Score and Medals Tally. Like us on Facebook or follow us on Twitter for more sports updates. You can also download the NDTV Cricket app for Android or iOS.