The ICC World Cup 2015 semi-final between New Zealand and South Africa was one of the most iconic matches in the annals of ICC events. 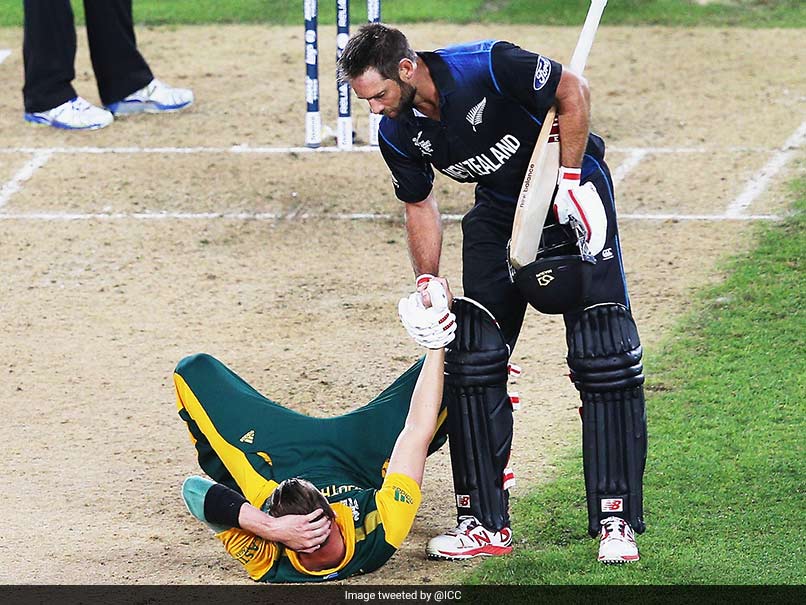 New Zealand had managed to win the rain-hit thriller in 2015.© Twitter

The ICC World Cup semi-final match between New Zealand and South Africa back in 2015 was one of the most memorable matches of the tournament. New Zealand managed to win the rain-hit thriller and enter the final of the 2015 World Cup. However, the highlight of the match was the spirit of cricket which was on display from both sides. Remembering the match, ICC tweeted a collage of images with the caption, "It was the greatest #CWC semi-finals of all time, but maybe this was the best part...".

In another tweet, ICC also released a clip from the semi-final showing the final over of the match where Grant Elliott smashed a six to help his team cross the line and win the thrilling contest with one ball to spare.

It was one of greatest #CWC semi-finals of all time, but maybe this was the best part...#SpiritOfCricket pic.twitter.com/ew5Shdjacy

In the rain-hit semi-final clash between the two sides, South Africa had won the toss and elected to bat first. After losing two quick wickets early on, Faf Du Plessis and AB De Villiers scored 82 and 65 respectively which set the tone for their innings. David Miller, the left-handed batsman also struck an important 49 off just 18 balls to help the Proteas reach a total of 281 in 43 overs.

New Zealand needed to score 298 to win the match after the total got revised because of the Duckworth Lewis method. While chasing, the Kiwis got off to a good start but lost quick wickets in the middle which brought South Africa back in the game. However, Grant Elliott's 84 off 73 proved to be a game-changer for the Kiwis as he helped his side win one of the most memorable games of cricket.

South Africa Cricket Team Cricket
Get the latest updates on India vs Australia and check out  Schedule, Results and Live Score. Like us on Facebook or follow us on Twitter for more sports updates. You can also download the NDTV Cricket app for Android or iOS.