"Hit It Out Of The Park": Mithali Raj's Message To Taapsee Pannu After Biopic Poster Release

The biopic on Mithali Raj is expected to be released on February 5 next year. 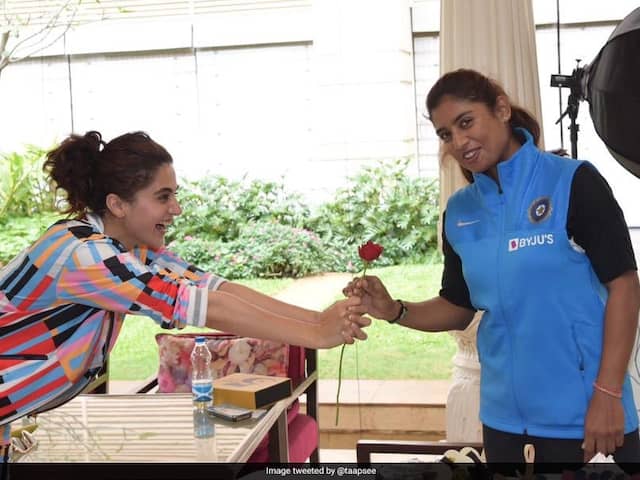 Mithali Raj shared poster of her biopic and left a special message for Taapsee Pannu.© Twitter

Mithali Raj on Wednesday shared the poster of ‘Shabaash Mithu' – the upcoming biopic based on her life. Mithali, in her Instagram post, thanked the makers of the movie for sharing her story with the world. "Big thank you to @viacom18 for sharing my story with the world," Mithali wrote in her post. She also left a special message for Bollywood actress Taapsee Pannu who will be portraying Mithali's role on screen. "@taapsee you ARE going to "hit it out of the park"!!," read Mithali's message for Taapsee. In her career spanning over two decades, Mithali Raj has broken several records. She is the most successful women's cricketer in the world in the 50-over format, with 6,888 runs from 209 matches. In fact, she is the only woman cricketer to play international cricket for over two decades.

Big thank you to @viacom18studios for sharing my story with the world. @taapsee you ARE going to "hit it out of the park"!!

Taapsee Pannu, on Mithali's 37th birthday in December last year, had announced that she will be playing the lead role in her biopic. Now with the first look of the movie released, it has been revealed that the movie will hit the theaters on February 5 next year.

Mithali has played 209 ODIs, 10 Tests and 89 Twenty20 Internationals (T20Is). She also holds the world record of playing the greatest number of ODIs among women cricketers.

She is only Indian skipper to lead India in the finals of two ICC ODI World Cup finals - in 2005 and then in 2017.

However, Mithali, who continues to lead the Indian side in the 50-over format, announced her retirement from game's shortest format last year to focus her energies on 50-over World Cup in 2021.

Earlier this month, the Board of Control for Cricket in India (BCCI) demoted Mithali to Grade B from A in its central contracts list. The latest contracts which run from October 2019 to September 2020 will see Mithali getting Rs 30 lakh.