Marnus Labuschagne shared a glimpse of his "backyard training" session which also features his pet dog. 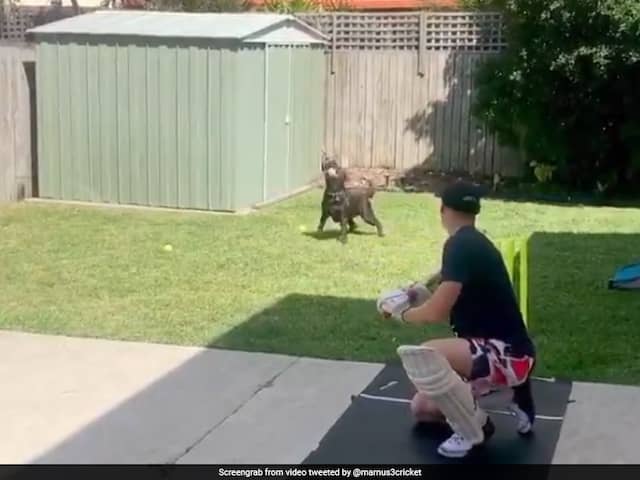 Marnus Labuschagne, who was one of the standout performers for Australia last year, tweeted a video sharing a glimpse of his "backyard training" session. This, however, was far from a normal training session video as it also featured Labuschagne's pet dog. In the video, Labuschagne can be seen deflecting the ball towards his pet dog, standing in the slips, who completed a simple catch without a fuss. "Thought that we had to give this one a try... tough to tell who is enjoying the backyard training more #StayHome #StaySafe #milo," Labuschagne captioned the video on Twitter. Labuschagne is not the first cricketer to share such a post with his fans.

Thought that we had to give this one a try... tough to tell who is enjoying the backyard trainings more #StayHome #StaySafe #milo pic.twitter.com/CJL2vt2Fyz

New Zealand skipper Kane Williamson had posted a similar video on Instagram last month. "Sandy in the slips! Any other dogs out there joining Sandy? #caninecordon #daytwoisolation" Williamson wrote, sharing a slow-motion video.

Labuschagne had a terrific 2019 as he finished the calendar year as the leading run-scorer in the red-ball format. He amassed 1104 runs at a staggering average of 64.94 in just 17 innings of 11 Test matches. He scored these runs with the help of three hundreds and seven half-centuries.

Labuschagne's rise to the top was no short of a fairy tale as he came in the side as a concussion substitute after Steve Smith was injured by a Jofra Archer bouncer and never looked back since, sealing his spot with consistent performances.

Labuschagne was named among Wisden's five cricketers of the year, alongside teammate Pat Cummins and England speedster Jofra Archer.

Australia Cricket Team Cricket Marnus Labuschagne
Get the latest Cricket news, check out the India cricket schedule, Cricket live score . Like us on Facebook or follow us on Twitter for more sports updates. You can also download the NDTV Cricket app for Android or iOS.