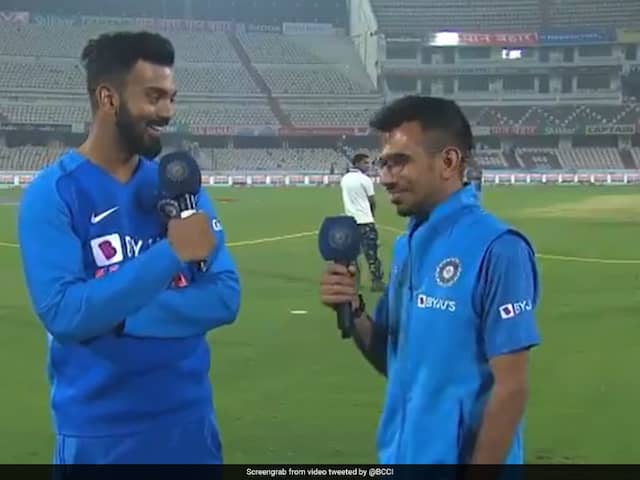 KL Rahul and Yuzvendra Chahal both played for Royal Challengers Bangalore in the IPL.© Twitter

KL Rahul took to Twitter on Sunday to answer a few questions asked by his fans during an #AskKL session on the micro-blogging site. In reply to one of the questions, KL Rahul came up with a hilarious advise for his India teammate Yuzvendra Chahal, who has taken social media by storm with his funny TikTok videos. A fan asked KL Rahul about his views on Yuzvendra Chahal's TikTok videos, the wicketkeeper-batsman replied that the leg-spinner should stick to bowling googlies on the field. "I think he should stick to bowling googlies on the field," KL Rahul tweeted.

I think he should stick to bowling googlies on the field https://t.co/qLpquHYjhE

Answering the question, Rahul replied: "I think it is got to be @ABdeVilliers17."

Rahul and de Villiers have played together in the past for the Indian Premier League franchise -- Royal Challengers Bangalore (RCB).

During the ''Ask Rahul'' session, the right-handed batsman also revealed his favourite moment while playing for Karnataka.

Rahul said that winning the Ranji Trophy during the 2013-14 season has to be his favourite cricket moment while playing for Karnataka.

As all sporting events across the world have been suspended due to the coronavirus pandemic, Rahul is enjoying some time away from cricket.

He was phenomenal with the bat in the limited-overs series against Australia and New Zealand. He has scored one century and four fifty-plus scores in his last ten innings in ODIs and T20Is combined.

Rahul would have been leading the Kings XI Punjab had the IPL commenced from March 29. However, the tournament has been suspended indefinitely due to the coronavirus pandemic.

AB de Villiers Cricket
Get the latest updates on IPL 2020, check out the IPL Schedule for 2020 and Indian Premier League (IPL) Cricket live score . Like us on Facebook or follow us on Twitter for more sports updates. You can also download the NDTV Cricket app for Android or iOS.