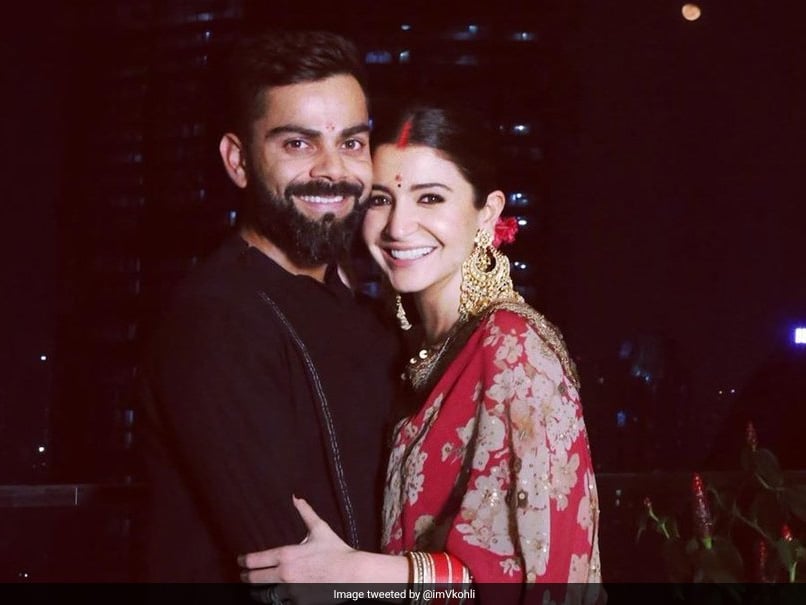 Virat Kohli and Anushka Sharma had tied the knot in December 2017 in Italy.© Twitter @imVkohli

Virat Kohli and his Bollywood actress wife Anushka Sharma, arguably India's favourite celebrity couple, keep making appearances on each other's social media posts. On Thursday, the power couple, who had tied the knot in December 2017 in a super-secret ceremony in Italy, celebrated their second Karwa Chauth. Kohli and Anushka, who met during the shoot of a TV commercial, freely indulge in social media display of affection, giving fans an insight into their extraordinary romance. Virat Kohli took to Twitter and posted a picture with his wife captioned, "The ones who fast together laugh together. Happy karvachauth." Dressed in ethnic outfits, Virat Kohli and Anushka Sharma looked super stylish as they celebrated the occasion.

The ones who fast together laugh together . Happy karvachauth pic.twitter.com/7KQXp0Jkcc

Anushka Sharma also posted a similar picture on her Instagram account. "My partner for lifetime & beyond and my fasting partner for the day. Happy karvachauth to all," Anushka wrote.

Happy #KarwaChauth my love, you are far but still always close to me. Cannot wait to see you soon. love u lots #AeshaDhawan.
Wishing all other married couples as well. May God bless you all with a peaceful long life together. ?? pic.twitter.com/gNa9h1QbLF

Wishing my favourite person and all of you a very Happy Karwa Chauth ? @PratimaSinghBB pic.twitter.com/ISVT1mD8V4

As far as cricket is concerned, Virat Kohli was the star of the show as India completely dominated South Africa to win the second Test by an innings and 137 runs in Pune on Sunday.

In the process, India also clinched the three-Test series with a match to spare.

Moreover, it was India's record 11th Test series victory on home soil, beating the Australia's 10 on the trot.

Ecstatic after the massive win, Virat Kohli, who won the man of the match award for his career-best score of 254 not out, said that every win is important in the ICC World Test Championship and his team will not take it lightly in the final Test.

The 3rd and final Test of the series will begin in Ranchi on Saturday.