Chasing 210 for a win, KKR lost their openers early. All eyes were on Uthappa, who has been in the form of his life of late. 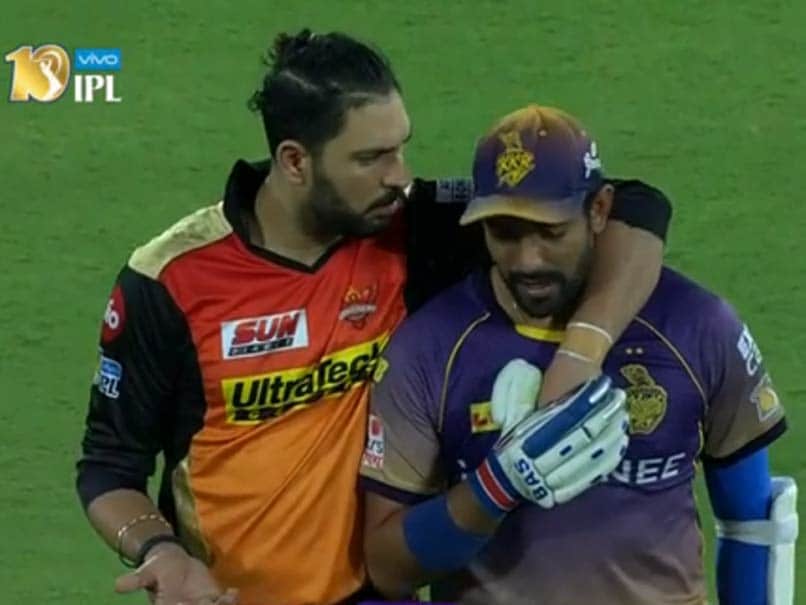 Robin Uthappa was involved in an incident with SRH pacer Siddarth Kaul.© BCCI

Kolkata Knight Riders' (KKR) in-form batsman Robin Uthappa lost his cool during his side's Indian Premier League match on Sunday against defending champions Sunrisers Hyderabad (SRH). The right-hander was involved in an incident with SRH pacer Siddarth Kaul in the third of the KKR innings.

Chasing 210 for a win, KKR lost their openers early. All eyes were on Uthappa, who has been in the form of his life of late.

In the third over of the match, Robin got off the mark with a boundary of Kaul's bowling. However as their paths crossed, Uthappa shouldered Kaul in a bid to unnerve him. Kaul, who had bowled a tidy over, was taken aback with the 31-year-old's attitude.

Veteran Indian cricketer Yuvraj Singh, however, was unhappy with Uthappa's conduct. Even the umpire had a word with Uthappa.

When the match was interrupted by rain, Yuvi went up to Uthappa and had a chat with him. Later, Yuvi put his hand around the KKR batsman's neck and dished out a piece of advice.

Uthappa, who has played with Yuvraj for India, was receptive and acknowledged his senior's words.

Warner too tapped Uthappa on his back to let he wasn't happy with his behavior.

Warner led from the front, smashing a sensational century to power Hyderabad to comfortable 48-run win over Kolkata. Warner butchered the Kolkata bowlers with 59-ball 126-run innings, studded with 10 fours and 8 sixes to power Hyderabad to an imposing 209-3 after captain Gambhir had decided to bowl after winning the toss.

Comments
Topics mentioned in this article
Kolkata Knight Riders Sunrisers Hyderabad IPL 2017 Yuvraj Singh Cricket Robin Uthappa
Get the latest updates on ICC T20 Worldcup 2022, check out the Schedule and Live Score. Like us on Facebook or follow us on Twitter for more sports updates. You can also download the NDTV Cricket app for Android or iOS.