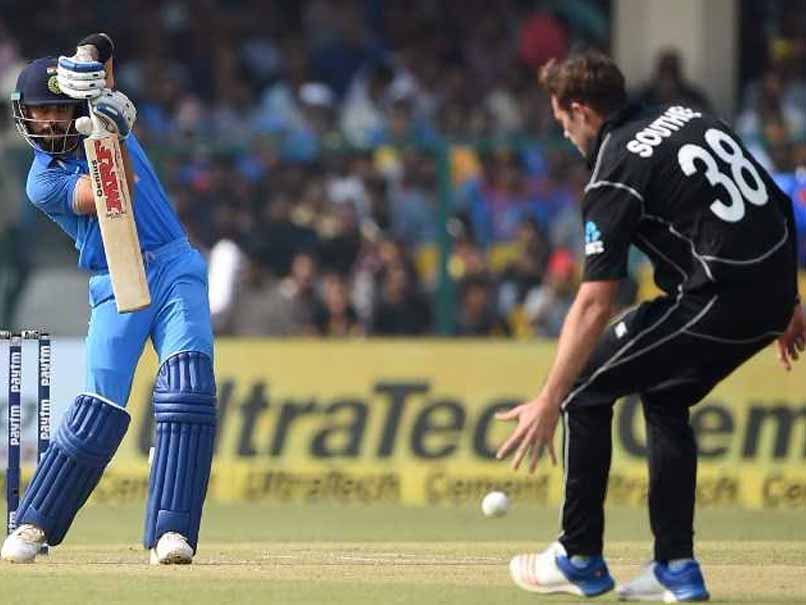 India skipper Virat Kohli was once again in the thick of things against New Zealand in the three-match ODI series that India won 2-1 in Kanpur. He was in his elementsin the first ODI played at the Wankhede Stadium, Mumbai as he got to his 31st centurywith utmost ease but the hosts failed to defend a formidable total of 280 for 8 as the visitors cantered through to a six-wicket victory, thanks to a 200-run stand between Ross Taylor and Tom Latham.

India had their work cut out in the next two matches after losing the first ODI and the Men in Blue didn't disappoint. The second ODI, however saw Kohli (29) playing a loose shot after getting set as he threw his wicket away. Kohli for most part of his innings took a leg-stump guard in the second ODI which might have led him to fish at a ball he should have left, thereby forcing him to play away from his body.

He must have taken note of that and came back brilliantly in the third and final ODI where he once again showed his class and brought up his 32nd ODI century. The New Zealand bowlers obviously had a set plan for Kohli to probe him outside the off-stump and hope that he again repeats the same mistake by playing away from his body. But the Indian captain this time was a step ahead of the opposition which is always the hallmark of a great player.

In the third ODI, Kohli took a middle-stump guard for most part of his innings and he started off in fine fashion by clipping a ball through mid-wicket for a boundary. It wasn't exactly bowled at his legs but since he took a middle-stump guard and along with the initial shuffle, it took him that much closer to the ball that was pitched in and around off-stump and was full enough to be hit through the on-side, bringing his bottom hand into play.

The Indian captain by taking a middle-stump guard not only countered the off-stump line to perfection but also made the New Zealand bowlers bowl to his strengths. The change of stance not only helped him counter the corridor of uncertainty line but also helped him get that much closer to the ball on a wicket that got slower towards the fag end of the Indian innings.

India, however posted a huge first innings score of 337 for 6 that at the end proved to be a little too much for the Kiwis to chase and win the series.

This was India's seventh bilateral series win on a trot and Kohli's seventh successive series victory, most by any Indian captain. Clearly, the Indian captain is leading by example and setting the bar high for his teammates to follow.

The three-match T20I series between the two sides starts on Wednesday, November 1 and Kohli will be well aware of the fact that India don't particularly have a great record against the Kiwis in the shortest format of the game. The first match will be played at the Feroz Shah Kotla stadium, New Delhi.

Comments
Topics mentioned in this article
India Cricket Team New Zealand Cricket Team Virat Kohli Tom Latham Ross Taylor Green Park, Kanpur India vs New Zealand Cricket
Get the latest updates on T20 World Cup, check out the T20 World Cup Schedule and Live Score . Like us on Facebook or follow us on Twitter for more sports updates. You can also download the NDTV Cricket app for Android or iOS.