Highlights, India vs New Zealand: The hosts beat the Kiwis by six runs in the third and final ODI in Kanpur to clinch the 3-match series 2-1. 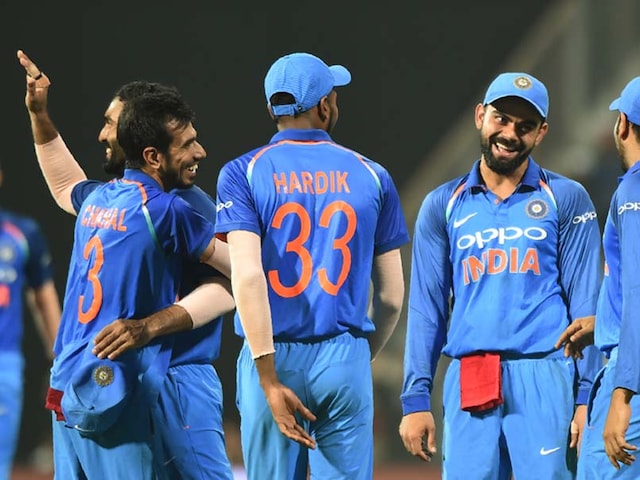 Jasprit Bumrah produced a brilliant bowling performance in trying circumstances to help India restrict New Zealand to 331 for seven after the hosts had scored 337 for six after being put into bat in Kanpur on Sunday. India beat the visitors by six runs in third and final ODI in a thrilling contest at Green Park to clinch the three-match ODI series 2-1. Earlier, opener Rohit Sharma and captain Virat Kohli slammed centuries to power India to a big total. Rohit (147), who brought up his 15th ton, smashed 18 boundaries and two sixes in his 138-ball knock. Kohli scored 113 runs in his 106-ball innings. His knock was studded with nine boundaries and one six. For New Zealand, Tim Southee, Adam Milne and Mitchell Santner claimed two wickets apiece.

Catch all the Highlights between India and New Zealand straight from Green Park stadium, Kanpur

21:28 IST: Santner guides Bumrah towards fine leg for a couple.

21:26 IST: Brilliant start from Bumrah. He starts with a dot ball.

21:20 IST: SIX! Santner smashes Bhuvneshwar towards long on for a maximum. How costly this going to be for India? New Zealand need 17 off 10 balls.

21:15 IST: A loud LBW appeal from Bumrah. Umpire says NO. Kohli has asked for a review.

21:13 IST: Excellent yorker from Bumrah. Brilliant bowling from him in death overs.

21:07 IST: Excellent fielding by Virat Kohli at long off.

21:03 IST: FOUR! Nicholls leans back and pulls the ball towards deep mid wicket.

21:02 IST: Full toss from Bumrah. Nicholls smashes the ball towards long on. He takes the first and runs hard for the second. Brilliant running between the wickets.

20:39 IST: FOUR! Henry Nicholls sends Kedar Jadhav towards long off for a boundary.

20:31 IST: FOUR! Latham leans back and cuts the ball towards deep backward point. Bhuvi isn't happy with this shot.

20:18 IST: Ross Taylor sends Bhuvneshwar towards square leg. He will get a couple.

19:58 IST: FOUR! Latham plays this too late. He goes on backfoot and slashes the ball towards deep backward point for a boundary.

19:33 IST: A missed run out and a collision between Williamson and Pandya. It seems Pandya has hurt his finger. No serious damage as both players are back in action.

19:04 IST: Brilliant stumping from Dhoni. But he is not looking confident. Replays shows Munro is safe.

18:51 IST: FOUR! Williamson goes on backfoot and cuts the ball towards deep extra cover for a boundary.

18:48 IST: Beauty from Chahal. Spinning web from the youngster. It turns and Dhoni removes the bails in a flash.

18:45 IST: 50-run partnership comes up between Williamson and Munro.

18:43 IST: FOUR! Williamson dances down the track and sends Axar Patel towards long off for a boundary.

18:41 IST: FOUR! Kane Williamson waits till the end and slices the ball towards deep backward point for a boundary.

18:24 IST: SIX! Munro plays this shot with bottom hand and sends Bhuvneshwar over the deep mid wicket region for a maximum. New Zealand 69/1 in 8.3 overs.

18:20 IST: FOUR! Hardik Pandya comes into the attack. Williamson welcomes the pacer with a superb boundary towards deep mid wicket.

18:08 IST: Guptill plays this towards deep extra cover. He will get 3 runs. Excellent running between the wickets from Guptill and Munro.

Couldn't fit @ImRo45 in the same tweet, his knock deserved a separate tweet. Class and style personified, well done on another ton bro.

number 32, watching a game from the start after a long time. Top knock from @imVkohli , over to the bowlers now to seal another series.

17:45 IST: Bhuvneshwar to start the proceedings. Martin Guptill and Colin Munro making their way to the middle. Here we go...

16:58 IST: SIX! Another maximum of India's innings. This time it came off Kedar Jadhav's bat. The right-hander smashes the ball over backward square leg region. India 331/4 in 49 overs.

16:56 IST: Kedar Jadhav hits Southee towards deep extra cover. He will get a couple.

The KING reaffirms his dominance - 2nd hundred of the #INDvNZ series. @imVkohli pic.twitter.com/TJZ3cQxXVb

16:02 IST: FOUR! It is raining boundaries at Green Park. Kohli opens the face of the bat and guides Grandhomme towards third man.

16:01 IST: FOUR! Rohit Sharma sends Grandhomme towards long on for another boundary.

16:00 IST: FOUR! Half Volley from Grandhomme. Kohli smashes him towards long on. What a shot from him.

15:43 IST: CENTURY! Rohit Sharma slams his 15th ODI century. What a moment for the right-hander. He equals Virender Sehwag's record of 15 centuries.

A combination of elegance, timing and placement for Hitman as he brings up his 15th ODI Century #INDvNZ @ImRo45 pic.twitter.com/ezqxD8CmSQ

15:36 IST: FOUR! Kohli plays this with straight bat. The Indian skipper sends Milne straight down the ground for a boundary. India 178/1 in 31.2 overs.

15:31 IST: FOUR! Rohit Sharma moves to 97 with a boundary off Santner straight down the ground.

15:01 IST: FOUR! Kohli shuffles across and clips the ball between mid-on and mid-wicket for a boundary.

14:52 IST: FOUR! Rohit leans back and sends Grandhomme towards backward square leg for a boundary. India 104/1 in 19 overs.

14:16 IST: SIX! Rohit Sharma picks the length nicely and smashes the ball over mid-wicket region. First maximum of the match. India 53/1 in 9.5 overs.

14:09 IST: FOUR! Sheer timing from Kohli. The India skipper guides Southee towards sweeper cover for a boundary. India 43/1 in 8.2 overs.

14:08 IST: FOUR! Rohit plays this with straight bat and sends Boult towards long on. What a shot from the right-hander. India 39/1 in 8 overs.

13:56 IST: FOUR! Another beautiful shot from Dhawan. The southpaw comes forward and sends Trent Bount towards covers. India 28/0 in 5.4 overs.

13:48 IST: Team India are unchanged for the final ODI.

#TeamIndia go in as an unchanged side for the final ODI #INDvNZ pic.twitter.com/NX0mIZKQXj

13:40 IST: FOUR! Dhawan plays this too late and sends the ball beautifully towards deep backward point. India 11/0 in 2 overs.

13:35 IST: FOUR! First boundary of the match. Rohit Sharma slashes the ball towards deep backward point for a boundary. India 6/0 in 0.5 over.

13:30 IST: India openers Rohit Sharma and Shikhar Dhawan are making their way to the middle. Tim Southee to start the proceedings for Black Caps.

The BLACKCAPS have won the toss and opted to bowl first in the deciding ODI in Kanpur #indvnz pic.twitter.com/VS4BS6HmZY

12:50 IST: Here's how Team India practiced ahead of the third ODI.

12:45 IST: Hello and welcome to the Live coverage from the third and final ODI between India and New Zealand at Green Park stadium in Kanpur.

Rohit Sharma is due for a big score after making 7 and 20 in the earlier games. Just like the home team, the Black Caps would look to get back to winning ways as they remain within touching distance of winning a rare series in India. For starters, they would have to put up a much better batting effort than what they managed in the previous game. Ross Taylor and Latham had bailed them out in Mumbai with a match-winning 200-run stand after New Zealand had lost their top three for 80 runs. The top three did not do much either in Pune but with Taylor and Latham also not firing on that occasion, they ended up with a below par 230. There can't be a better time for captain Kane Willamson to lead from the front after a couple of failures.