With the three-match T20I series tied at 1-1, India will take on New Zealand in a virtual final on November 7. 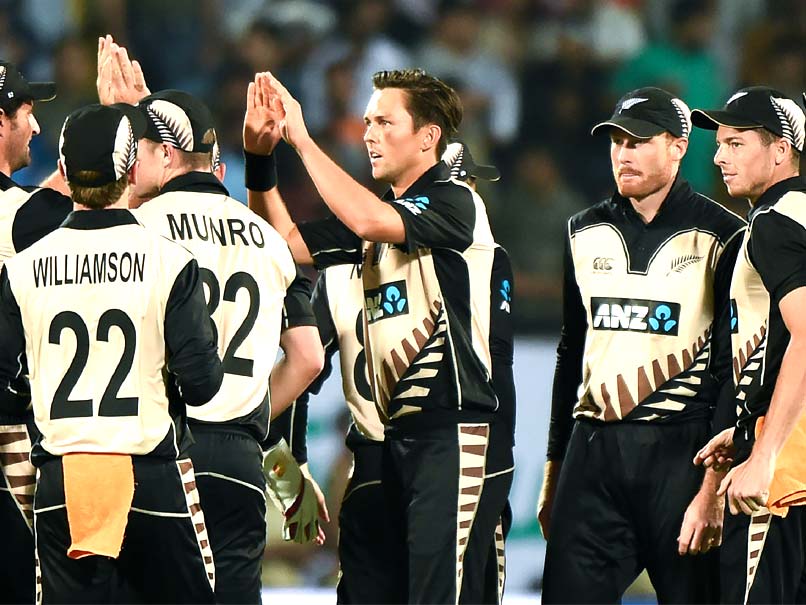 Trent Boult starred for New Zealand with the ball against India in the second T20I.© AFP

New Zealand opener Colin Munro played a brilliant unbeaten knockof 109 off 58 balls to power New Zealand's 40-run win over India in the 2nd T20I in Rajkot on Saturday. The Kiwi bowlers made sure the 197-run target was out of reach of India's famed batting line-up with some disciplined bowling. Trent Boult starred for the visitors with a spell of 4/34, in which he dismissed India's in-form openers early on in the run chase. Earlier, Munro along with Martin Guptill (45) gave a flying start to his team which helped the Kiwis post an imposing 196/2. Munro, who was handed at least three lives during his innings, made sure to make the most of the opportunities as he blasted the Indian bowlers all over the park with ease. During his knock, the left-handed batsman struck seven mammoth sixes and as many boundaries.

Munro raised a 105-run partnership for the first wicket with Martin Guptill (45 off 41), setting the platform for a big total in their do-or-die match.

Top-order blows pegged India back with both the openers -Shikhar Dhawan (1) and Rohit Sharma (5) - sent back by paceman Trent Boult (4/34).

Although captain Virat Kohli kept India's hopes alive with a typically aggressive inning of 65, studded with a six and eight fours, the home team's asking rate kept climbing steeply and in the end, they fell well short.

The hosts ended at 156 for seven. The third and final match of the series will be played on November 7 at Thiruvananthapuram.

India started the run-chase in disastrous fashion by losing in-form openers, Dhawan and Rohit Sharma, in the second over to Boult.

The duo, who had made identical 80 runs in a record opening stand of 158 for a winning cause in the series opener at Delhi, were out to poor shots, Dhawan losing his stumps when playing across to the left arm pacer and Sharma hanging his bat out loosely to be caught behind.

Young Turk Shreyas Iyer, in only his second game for the country, started in an encouraging fashion by playing some excellent square of the wicket shots on the off-side for fours.

With captain Virat Kohli, seen in superb touch again, Iyer stitched together a partnership of 54 runs, but then lost his wicket to a slog-sweep off centurion Munro who ran yards to his right to complete a good catch.

Kohli, who overtook his younger partner with a flurry of boundary hits comprising two fours and a six in the previous over from Santner, was left with the task of guiding India home.

India lost the Hardik Pandya in the next over from Ish Sodhi who foxed the batsman with a googly and disturbed the stumps to leave the hosts at a precarious 67 for four.

At the halfway stage, India were 71 for 4, requiring 126 more to win the game and take a winning 2-0 lead in the series.

Kohli, finding the gap to hit a four regularly, and his predecessor at the helm, Mahendra Singh Dhoni, kept India in sight of the target with a stand of 56 runs.

The Indian skipper reached his 18th half century in 32 balls while Dhoni, content to play second fiddle, survived a stumping chance off Sodhi before carting the next ball over long-on for a six.

And it proved to be so as Kohli stepped out to Santner for a mighty heave and edged to the New Zealand keeper and India's task became even more difficult at 123 for 5 with 21 balls remaining.

Dhoni's was the seventh wicket to fall in the last over after the fall of Axar Patel two overs earlier.

Earlier, none of the Indian bowlers, barring Jasprit Bumrah in his first spell, could contain the rampaging Munro. The worst sufferer was debutant Mohammed Siraj, who was struck repeatedly for sixes by the southpaw and ended up giving away 53 runs for the lone wicket of rival skipper Kane Williamson.

Spinners Yuzvendra Chahal (1/36) and Axar Patel too failed to stem the run-flow.

Comments
Topics mentioned in this article
India Cricket Team New Zealand Cricket Team Colin Munro Virat Kohli Kane Williamson India vs New Zealand Cricket
Get the latest updates on ICC T20 Worldcup 2022 and CWG 2022 check out the Schedule, Live Score and Medals Tally. Like us on Facebook or follow us on Twitter for more sports updates. You can also download the NDTV Cricket app for Android or iOS.