Earlier this year as well, Salgaoncar was in dock when ICC match referee rated Pune's pitch as poor after the end of the first Test between India and Australia. 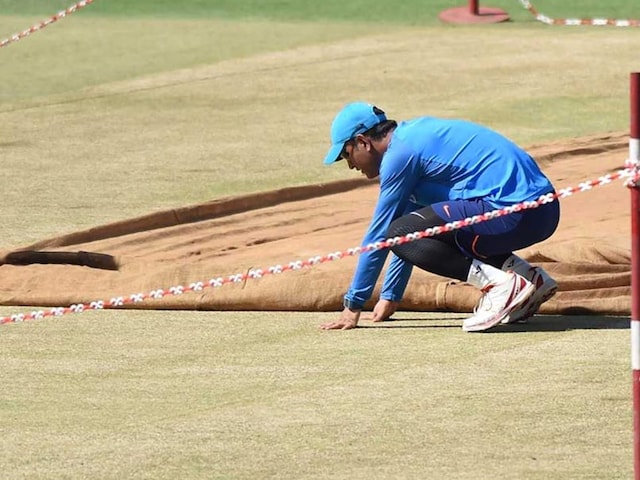 Despite the controversy, the 2nd India-New Zealand ODI went ahead as planned.© AFP

The President of the Maharashtra Cricket Association Abhay Apte on Wednesday said that the association will conduct a detailed inquiry into Pune curator Pandurang Salgaoncar's claims that he could tamper with the pitch ahead of the second ODI between India and New Zealand.

In the sting operation by India Today TV, Salgaoncar is seen and heard speaking about tampering with the pitch to an undercover reporter, who poses as a bookie, while standing on the pitch of the Maharashtra Cricket Association Stadium on Tuesday evening.

"I am here just to make one statement because since morning there has been some news which is appearing on the TV on a very disturbing subject, so I have to tell that the MCA, of course the BCCI and CoA have zero tolerance on such subjects," Apte told reporters ahead of the start of the second India-New Zealand ODI.

"So MCA will be making a detailed inquiry on what has happened or what has appeared on the television but before we have our urgent meeting," he added.

Apte also informed that Salgaoncar has been suspended with immediate effect and MCA has withdrawn his membership as well.

Salgaoncar is a former Maharashtra pacer, who played a total of 63 first-class games.

Earlier this year as well, Salgaoncar was in dock when ICC match referee rated Pune's pitch as poor after the end of the first Test between India and Australia.

The match had ended on the third day with the visiting team defeating India by a margin of 333 runs.

Comments
Topics mentioned in this article
India Cricket Team New Zealand Cricket Team Maharashtra Cricket Association Stadium, Pune Cricket India vs New Zealand
Get the latest Cricket news, check out the India cricket schedule, Cricket live score . Like us on Facebook or follow us on Twitter for more sports updates. You can also download the NDTV Cricket app for Android or iOS.