Virat Kohli fell before lunch for 123 to a contentious catch by Peter Handscomb at second slip from the bowling. 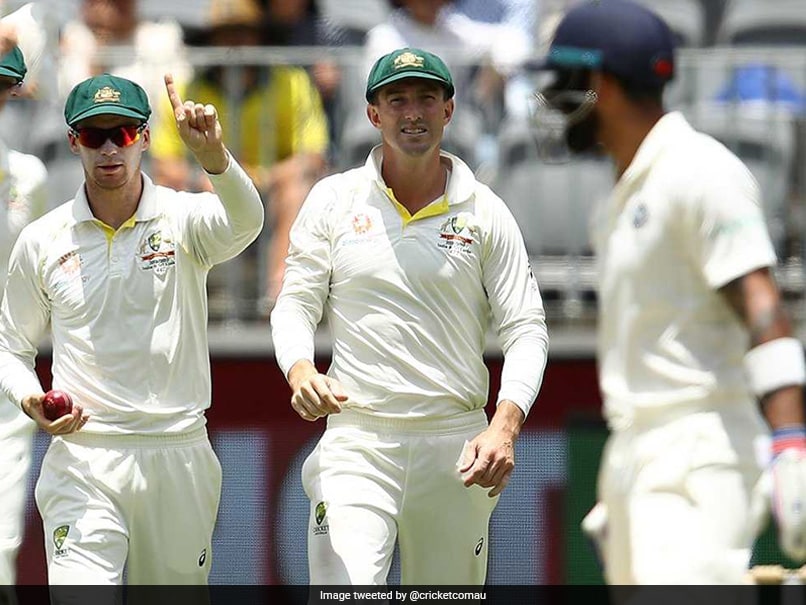 Virat Kohli stood his ground believing the ball had touched the ground.© Twitter

Virat Kohli stood tall and smashed the Australian bowlers to all parts of Perth, in the process reaching his 25th Test century on Sunday. The Indian skipper brought up his hundred in 214 balls on Day 3 of the 2nd Test, his seventh against Australia and sixth Down Under. Only Australian legend Don Bradman (68) had taken fewer innings to score 25 Test hundreds. However, Kohli's brilliant knock was cut short by a contentious decision when he was caught at second slip. The Indian skipper edged a Pat Cummins delivery to Peter Handscomb at second slip with the on-field giving a soft signal of out.

Handscomb claimed the low catch  but Kohli stood his ground believing the ball had touched the ground.

Replays were inconclusive and failed to show whether or not Handscomb managed to get his fingers underneath or the ball half-volleyed in. With no conclusive evidence, third umpire Nigel Llong went with the on-field umpire's soft signal of out.

Fans immediately took to Twitter and showed their displeasure at the decision with many bemoaning the lack of foolproof technology in the sport.

Virat Kohli given out on a Controversial Catch!
Ball clearly touched the ground pic.twitter.com/zdmpRUnvtN

That's a good effort but it's a not out may be fielder might not feel it but it's grounded clearly....that's a DUD decision from third empire......such a substandard

Whichever way U look at..to err is human..& whoever is handling 'technology'...humans of course.! And let's not discount basic human urge to 'cheat' whenever & wherever possible..I'd rather cherish @imVkohli at his imperial best than brood over doubting decisions..!!

eter Handscomb knew that he hasn39;t taken the catch clean but he still said out. This was the reason of the soft signal being out #AUSvIND #PerthTest @imVkohli @phandscomb54 #ViratKohli

Handscomb showing the ball got stuck between two fingers make it look questionable. There is no way that he could keep the ball from not touching the grass between the fingers.

Umpire giving soft signal OUT after the player saying he has taken the catch....Third umpire saying no conclusive proof to overturn the dicision of BOWLER.....Cricket needs a lot more of technology.

How is that even close? It's a bad decision. Cricket rules getting changed Down Under?

Such a sad way to end a phenomenal innings. Blatant cheating, what else can you expect from the Aussies? Grass and the ball in clear contact with each other. Oh no but the third umpire has no brains if his own that he has to go with a conclusively wrong soft signal! Shame!

He wasn't out. Unfortunate that even after having technology we can't make correct decisions. Visiting players in Australia suffer poor decisions, the trend continues.

It's clearly not out @imVkohli ....partial 3rd umpire.
I don't know why umpire on Australia tour always seems partial to India. @BCCI @ICC

If gave up the hope of good umpiring decision on Australian soil since 2008 #monkeygate @harbhajan_singh @vikrantgupta73 for God's sake dada was given out when it was not even remotely close by Ricky Ponting the captain atleast here it's the 3rd umpire...

Meanwhile, the Indian skipper also joined Sachin Tendulkar as the only Indian batsmen to have scored six Test centuries in Australia.

His dismissal triggered a late collapse, despite some aggressive blows by Rishabh Pant, who made 36.

In reply to Australia's 326, the visitors lost their last five wickets for just 35 runs to be bowled out for 284, giving the hosts a 43-run first innings lead.

Nathan Lyon was the best of the Australian bowlers, taking 5-67. Mitchell Starc and Josh Hazlewood both grabbed two wickets each.

Pat Cummins Australia vs India 2018/19 Australia vs India, 2nd Test Cricket
Get the latest updates on ICC Women's Cricket World Cup 2022 and IPL 2022, check out the Schedule , Live Score and IPL Points Table. Like us on Facebook or follow us on Twitter for more sports updates. You can also download the NDTV Cricket app for Android or iOS.