Virat Kohli also equalled Sachin Tendulkar's record of most Test centuries by an Indian Down Under. 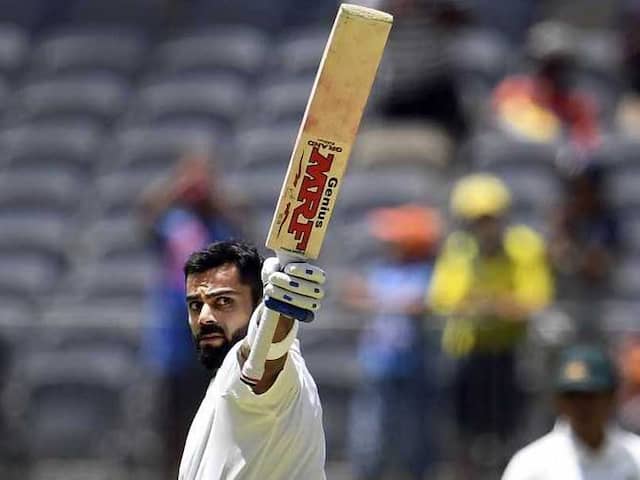 Virat Kohli braved all odds to score a brilliant century on day three of the second Test at the Optus Stadium in Perth on Sunday. The Indian skipper brought up his 25th Test century in 214 balls, his seventh against Australia and sixth Down Under. Only Australian legend Don Bradman (68) had taken fewer innings to score 25 Test hundreds. Kohli led India's fightback from 8/2 to 172/2 with a dogged 82 off 181 balls at stumps on day two. The world's top-ranked Test batsman needed just 18 runs to score his fifth Test ton of the year and he took five overs to reach the three-figure mark on day three.

In the process, the 30-year-old also equalled Sachin Tendulkar's record of most Test centuries by an Indian in Australia.

This is his 63rd international ton overall and his maiden century in Perth. He last scored a Test ton against the Windies in Rajkot in October.


During the first Test at the Adelaide Oval, Kohli became the fastest Indian to score 1000 Test runs in Australia.

Interestingly, Kohli is the fastest Indian to score 1,000 Test runs on Australian soil in just 18 innings. Overall, among visitors, only four Englishmen have done it quicker than Kohli in Australia.

Kohli is the world's top-ranked batsman in both Tests and one-day internationals (ODIs), with over 1,000 runs in both formats in the calendar year.

He was the top-scorer in South Africa with a hundred and a half century in a 2-1 Test series defeat, while in England, he fared even better. Kohli scored two centuries and three fifties but still the tourists were beaten 4-1 in the five-match Test series.

India lead the four-match series against Australia 1-0 and the visitors are yet to win a Test series Down Under in 11 attempts since 1947.

Virat Kohli Australia vs India 2018/19 Cricket Australia vs India, 2nd Test
Get the latest Cricket news, check out the India cricket schedule, Cricket live score . Like us on Facebook or follow us on Twitter for more sports updates. You can also download the NDTV Cricket app for Android or iOS.