Virat Kohli surely knows how to keep his spirits up irrespective of the situation. 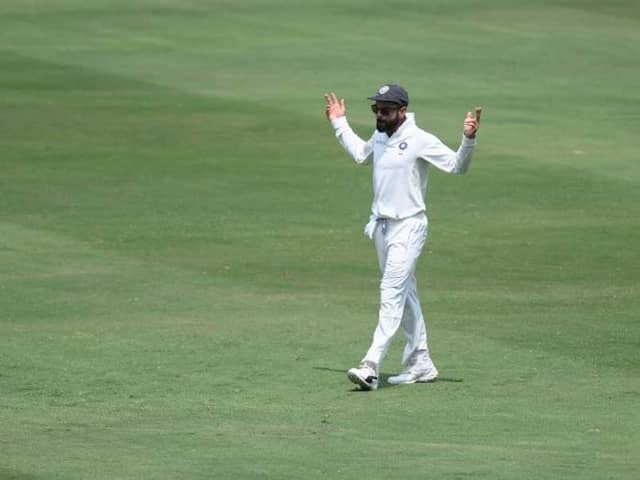 Virat Kohli was seen breaking into an impromptu dance while fielding in the slip region.© AFP

Team India skipper Virat Kohli surely knows how to keep his spirits up irrespective of the situation. Day three of the first Test between India and Australia has been full of rain interruptions in Adelaide but Kohli makes sure that he is never out of action. During the first session of play, the 30-year-old was seen breaking into an impromptu dance while fielding in the slip region. The official Twitter account of Cricket Australia posted the video with a caption that read, "Virat's loving it... #AUSvIND".

On Saturday, Travis Head matched his highest Test score but missed out on a century as Australia moved to within 15 runs of India after the first innings.

Batting on his home ground, Head made 72 before nicking a Mohammed Shami delivery to wicketkeeper Rishabh Pant after adding 11 to his overnight 61.

The play on day three began 45 minutes late in gloomy conditions, with the ground's lights on.

It only lasted 3.4 overs before the drizzle began again and the umpires called the players off after Mitchell Starc was caught behind by Pant, getting a thin edge to a Jasprit Bumrah delivery.

He added seven runs to his overnight eight.

Play resumed after an hour with Nathan Lyon accompanying Head, who looked on track to better his previous best Test score against Pakistan in October.

But he was enticed into prodding at a Shami ball and was out to deny him the chance of a maiden ton in his third Test.

Josh Hazlewood came to the crease but was gone first ball, again to the Shami-Pant combination, leaving Nathan Lyon unbeaten after a quick-fire 24, including a six.

For India, Ravichandran Ashwin finished with 3-57 and Jasprit Bumrah had 3/47.