Aaron Finch attempted an ambitious shot early in the innings and paid a huge price for it. 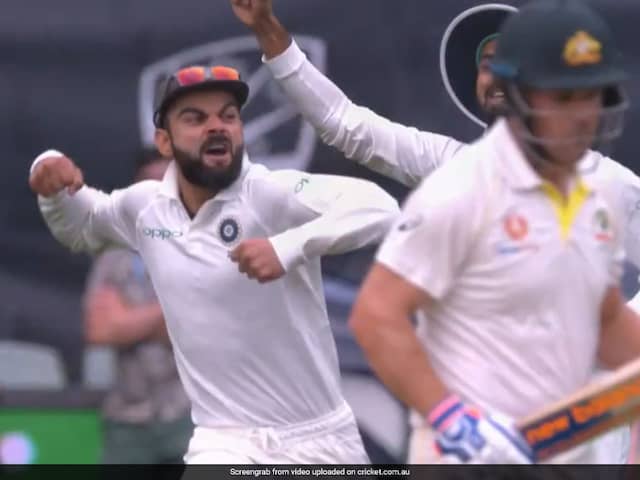 Team India got off to a perfect start as Ishant Sharma cleaned up Aaron Finch in the first over of Australia's innings of the first Test in Adelaide on Friday. The Indian pacer's pitched up delivery saw Finch taking a stride forward to drive but completely misjudged it. The ball got an inside edge as Finch's off and leg-stumps were sent cart-wheeling. Finch attempted an ambitious shot early in the innings and paid a huge price for it. Ishant definitely loved the sight, while Finch was clearly stunned, but it was India skipper Virat Kohli who was most pumped up on the field.

Ishant Sharma takes a beautiful wicket. All the commentators talk about is Virat Kohli. Because this. #AUSvIND pic.twitter.com/EwcBTMLNyf

Australia lost two wickets in the morning session Friday in reply to India's 250, leaving the first Test evenly poised with the experienced Usman Khawaja and Shaun Marsh at the crease.

India finished the opening day at 250/9, on the back of a battling 123 from Cheteshwar Pujara, and they failed to add to the total.

In reply, Australia were 57/2 at lunch with Khawaja not out 21 and Marsh unbeaten on one.

Usman Khawaja, returning after knee surgery, joined debutant Marcus Harris to show Finch how it should be done.

He compiled a patient 21, putting aside disrupted preparations after the shock arrest of his brother this week for allegedly framing a love-rival with a fake terror plot.

Harris, who was picked on the back of being the second highest run-scorer in Sheffield Shield this season, looked in good nick and unruffled by the occasion, hitting three fours in a solid 26.

But he was undone by a drifting ball from spinner Ravichandran Ashwin, getting an edge to Murali Vijay at silly mid-off, ending a 45-run partnership with Khawaja.

Aaron Finch Australia vs India 2018/19 Cricket Australia vs India, 1st Test
Get the latest Cricket news, check out the India cricket schedule, Cricket live score . Like us on Facebook or follow us on Twitter for more sports updates. You can also download the NDTV Cricket app for Android or iOS.