Hardik Pandya was on the receiving end of fans' anger after he took to Twitter to wish Zaheer Khan on his 41st birthday. 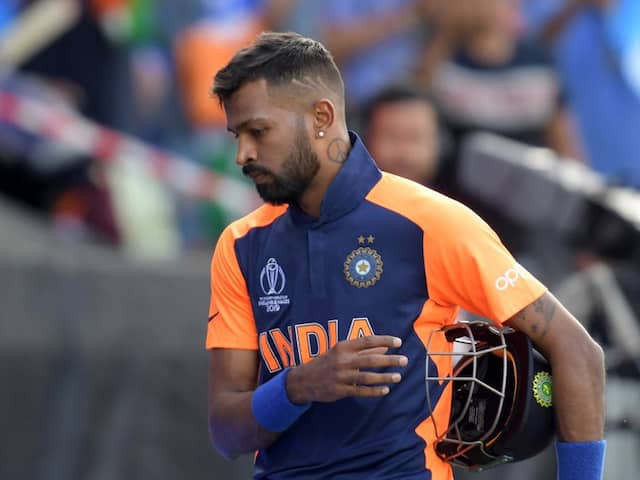 Hardik Pandya's wish for Zaheer Khan on his 41st birthday was labelled as "disrespectful".© AFP

Zaheer Khan celebrated his 41st birthday on Monday with wishes pouring in on Twitter from his former teammates and current India cricketers. Among the well-wishers was Hardik Pandya, who in his birthday post tweeted a video of him hitting a six off the bowling Zaheer Khan. The India all-rounder, who recently underwent a lower back surgery, captioned the video: "Happy birthday Zak ... Hope you smash it out of the park like I did here." Soon the comments section was flooded by angry fans who slammed Hardik Pandya for being "disrespectful" and showing no "class".

Happy birthday Zak ... Hope you smash it out of the park like I did here@ImZaheer pic.twitter.com/XghW5UHlBy

While many fans spoke of Zaheer Khan's achievements and his contribution to Indian cricket, others directly attacked Pandya.

@aayaam_pandey Pandya is the classic example of how fame+money does not guarantee you class! Gawaar aadmi hai ye

Happy birthday @ImZaheer ... The hanging in the air action followed the Lethal swing pure class ... Lend him some if possible

Please show respect to Zak Xpress... You were fortunate he wasn't in his prime when he bowled to you.

With this kind of maturity,i wonder how you got placed in indian team.With this attitude nd character Even when you perform well it's hard to be people favourites.Respect Legends

Says a mediocre 'all rounder' more (in)famous for his antics off the field than on it to a champion bowler who's taken 600 combined ODI/Test wickets!

Uneducated fellow.. please learn some manners and basic etiquettes FYI he is not ur friend or junior. he is the chief architect behind our many missions just like 2011wc and role model for millions. . When r u gonna learn ?? It seems like the coffee hangover is yet to be over

This is what happens when someone get fame and money so easily. Akad aur ghamand dekho jara. You have everything except manners and ethics. Kisi ne sach kaha h, paisa tameez nahi sikha sakta, wo in born quality hoti h aur no doubt you lack it.

What a jerk or he just doesn't understand class. His sense of humour is more like a sense of tumour. Learn from Graeme Smith

Former teammates like VVS Laxman and Shikhar Dhawan tweeted their birthday greetings for the left-arm pacer. "Happy Birthday @ImZaheer. Wishing you a wonderful day and the most amazing year Zak," Laxman tweeted, referring to Zaheer Khan by his popular nickname.

"Happy birthday Zak Bhai! Have a fabulous year ahead with loads of happiness and good luck," Dhawan wrote on the micro-blogging site.

Zaheer Khan played in 92 Tests and 200 ODIs for India and picked up 311 and 282 wickets respectively in the two formats.

He made his debut for India in an ODI against Kenya in Nairobi in October, 2000. He made his Test debut a month later. Since then, he went on to establish himself as one of India's best ever left-arm pacers. Zaheer Khan was notorious for his ability to swing the ball.

He was part of the Indian team that won the World Cup in 2011. In the final against Sri Lanka, Zaheer Khan managed to pick up two wickets and bowl three maiden overs.

His last appearance for India was the Test match against New Zealand in Wellington in 2014.

Hardik Pandya, meanwhile, last featured in the three-match T20I series against South Africa where he aggravated his back injury.

He was not picked in the India squad for the ongoing three-Test series against the visiting South Africans.

Hardik Pandya is also set to miss the Twenty20 International (T20I) series against Bangladesh which will be played in India, starting November 3.

Zaheer Khan Cricket
Get the latest Cricket news, check out the India cricket schedule, Cricket live score . Like us on Facebook or follow us on Twitter for more sports updates. You can also download the NDTV Cricket app for Android or iOS.