"This Is Shocking": Gautam Gambhir Outraged By Eden Gardens Honour For Mohammad Azharuddin

Former India skipper Mohammad Azharuddin was given a special distinction by Eden Gardens. 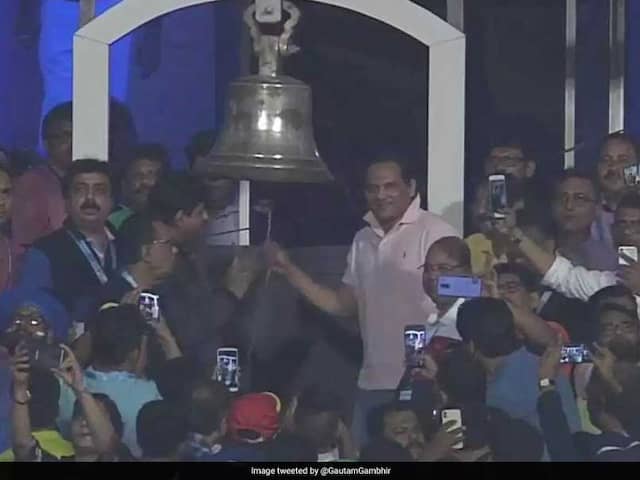 Mohammad Azharuddin was given the honour of ringing the bell at Eden Gardens.© Twitter

An angry Gautam Gambhir on Monday took to Twitter to blast the Board of Control for Cricket in India (BCCI), the Committee of Administrators (CoA) and the Cricket Association of Bengal (CAB) for allowing Mohammad Azharuddin to ring the bell at Eden Gardens. Ringing the bell ahead of an international match became a ritual at Eden Gardens and some other venues in India recently with former players being given the honour. However, Gambhir was left fuming with the decision to let a cricketer, who was once banned by the BCCI for match-fixing, being given such an honour.

The former India opener, who will always be affiliated to Eden Gardens after captaining the Kolkata Knight Riders (KKR) to the IPL title, expressed his displeasure at Azharuddin ringing the bell before the start of the 1st T20I between India and the Windies.

Gambhir said that while India won the match against the Windies, "the BCCI, CoA and CAB lost".

India may have won today at Eden but I am sorry @bcci, CoA &CAB lost. Looks like the No Tolerance Policy against Corrupt takes a leave on Sundays! I know he was allowed to contest HCA polls but then this is shocking....The bell is ringing, hope the powers that be are listening. pic.twitter.com/0HKbp2Bs9r

Azharuddin's career came to a controversial end after when he was implicated in the infamous match-fixing scandal in 2000 and subsequently banned for life by the BCCI.

He had fought the decision in the Andhra Pradesh High Court, which ruled in his favour in 2012. The Indian cricket board didn't challenge the court order and later made it clear that it no longer prohibited Azharuddin from holding any position in the ICC or BCCI or its affiliated associations.