Eoin Morgan revealed he was invited to play a game with the Afghan family on his walk back from dinner. 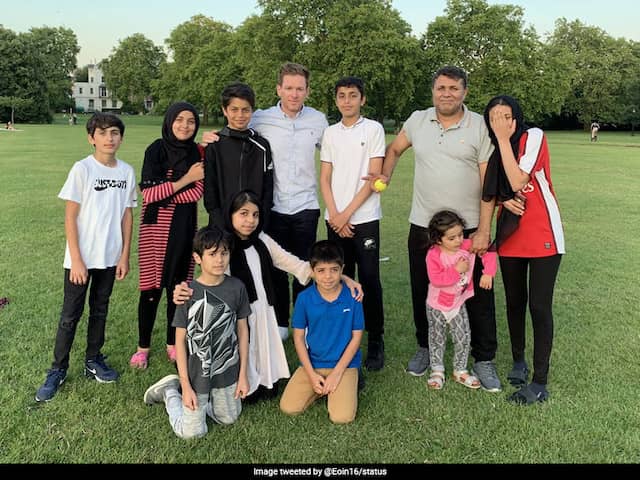 Eoin Morgan, England's World Cup winning captain, showed great spirit to play a game with an Afghan family and in return was appreciated by Afghanistan's newly appointed skipper Rashid Khan. Eoin Morgan took to Twitter and revealed, while he was walking back home after dinner on Monday, a Afghan family asked him to play a game, to which he obliged. The 32-year-old also posted a picture of his meeting, in which, the Afghan family can be seen in all smiles. Afghanistan captain Rashid Khan, was the one among many to reply on his tweet, as he called him a "legend".

On the walk home from dinner this evening I was asked to play a game with this lovely Afghan family.. #ThePowerofsport pic.twitter.com/GKqy7OGgib

Morgan became the first captain to lead England to a World Cup triumph in the 50-over format. However, there were many questions asked surrounding England's win over New Zealand in the World Cup 2019 final, on the basis of superior boundary count.

Even Morgan had admitted that it was not fair to have a result like that. He had also said that he spoke to his opposition skipper Kane Williamson but both couldn't come up with a rational explanation.

After England's troubled World Cup 2019 triumph, they are set to face neighbours Ireland in one-off Test starting at Lord's on Wednesday.

England will then host traditional rivals Australia in the Ashes, slated to take place from August 1 to September 16.

Eoin Morgan Cricket
Get the latest updates on IPL 2020, check out the IPL Schedule for 2020 and Indian Premier League (IPL) Cricket live score . Like us on Facebook or follow us on Twitter for more sports updates. You can also download the NDTV Cricket app for Android or iOS.