England captain Eoin Morgan led from the front as the hosts beat Pakistan by five wickets to win the second Twenty20 international at Old Trafford on Sunday. 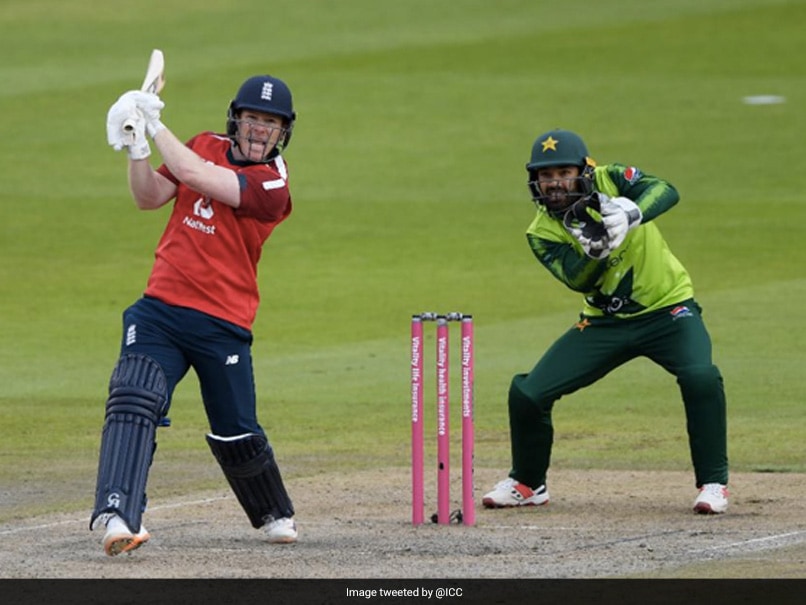 Eoin Morgan scored 66 runs off just 33 balls in the second T20I vs Pakistan on Sunday.© Twitter

England captain Eoin Morgan led from the front as the hosts beat Pakistan by five wickets to win  the second Twenty20 international at Old Trafford on Sunday. Morgan came in on a hat-trick after leg-spinner Shadab Khan had reduced the home side, who were chasing a stiff victory target of 196, to 66-2. But the Irishman and fellow left-hander Dawid Malan (54 not out) took the game away from tourists with a third-wicket stand of 112. Victory, achieved with five balls to spare, saw the 50-over world champions go 1-0 up in a three-match series following Friday's rain-marred no result in Manchester.

The travelling side's cause was not helped when experienced left-arm quick Mohammad Amir limped off after bowling just two overs with what appeared to be a hamstring injury.

Jonny Bairstow and Tom Banton made a sound start to England's chase.

But a partnership of 66 ended when Bairstow, on 44, miscued a sweep off leg-spinner Shadab Khan to short fine leg.

Next ball, with the batsmen having crossed, Banton -- fresh from making 71, his maiden fifty at this level, was lbw for 20 after missing a sweep.

Morgan survived the hat-trick delivery but could have been lbw for a second-ball duck to Shadab, who finished with fine figures of 3-34 from his maximum four overs.

But a tight umpire's call verdict following Martin Saggers' original not out decision, went in the batsman's favour.

Morgan cut Iftikhar Ahmed over long-off for an audacious six before late-cutting the spinner for four.

By the time he holed out off paceman Haris Rauf, England needed under a run-a-ball to win.

Malan might have missed this match had not England been fielding separate red and white-ball squads in a coronavirus-affected season, with batsmen such as Test captain Joe Root and Jos Buttler omitted from this series.

But his 35-ball half-century was his seventh score of fifty or more in just 12 Twenty20 internationals and Malan finished the match when he cut Afridi for four.

Leg-spinner Adil Rashid took 2-32 from his maximum four overs but the rest of England's attack lacked penetration, with seamer Tom Curran conceding 46 runs -- including 23 off one over.

Babar, the world's top-ranked Twenty20 batsman, pulled the first ball of the match, from fast bowler Saqib Mahmood, for four.

He went to fifty with a superb extra-cover drive off Rashid -- his seventh four in 37 balls.

But Rashid had his revenge when Babar miscued a pull to deep midwicket.

Hafeez kept the runs coming, with a scooped four off Mahmood seeing him to a 26-ball fifty before the 39-year-old was dismissed off the penultimate ball of the innings.

This series, which in common with all international cricket in England this season is being played behind closed doors due to COVID-19, concludes at Old Trafford on Tuesday.

Eoin Morgan Dawid Malan Cricket England vs Pakistan, 2nd T20I
Get the latest updates on IPL Auction 2023 and check out  IPL 2023 and Live Cricket Score. Like us on Facebook or follow us on Twitter for more sports updates. You can also download the NDTV Cricket app for Android or iOS.