With England chasing 296 to complete a series sweep, Joe Root brought out an outrageous reverse-scoop off pacer Neil Wagner to leave Twitter astonished. 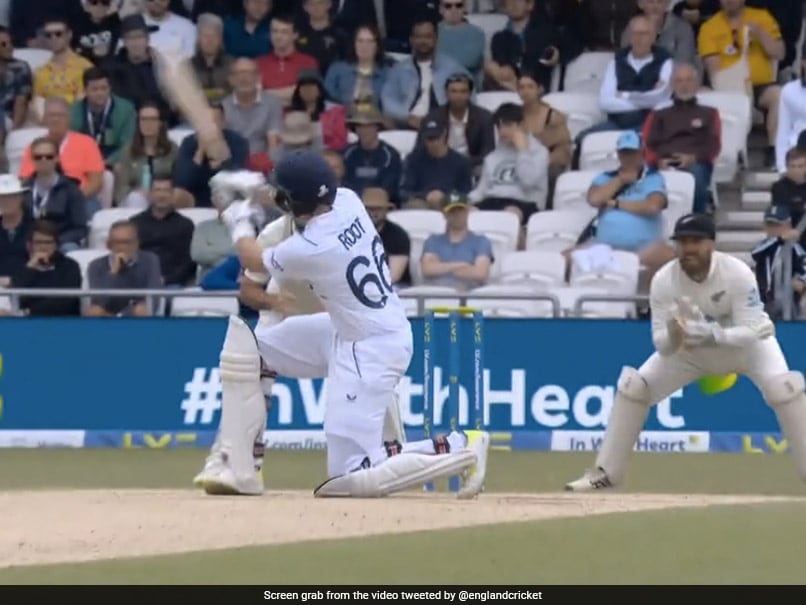 With every passing day, England's refreshed approach in Test cricket under Ben Stokes and Brendon McCullum is leaving viewers more in awe with their exciting brand of cricket. While the likes of Stokes and Jonny Bairstow have thrilled fans with their aggressive batting, even Joe Root, who is considered a more traditional Test batter, is getting in on the act. During Day 4 of the ongoing third Test against New Zealand at Headingley in Leeds, with England chasing 296 to complete a series sweep, Root brought out an outrageous reverse-scoop off pacer Neil Wagner to leave Twitter astonished.

The left-handed Wagner, running in from over the wicket, bowled one full and across Root, and England's star batter was quick to change stance and scoop the ball over the third man boundary.

Sharing the video on Twitter, the England Cricket Board simply wrote: "Joe Root. You are ridiculous."

Joe Root. You are ridiculous.

The shot sent Twitter into a frenzy, with fans lauding England's "ridiculous" approach in the longest format of the game.

The Brendon McCullum effect is well and truly on England batsman - Joe Root reverse scooped Wagner for a six. pic.twitter.com/j0tqM45LkM

ROFL! Joe Root reverse scooping a fast bowler for a six in the 4th innings of a test match chasing 300 with the match very much in balance!!

I didn't expect this kind of behavior "from Joe Root"

Looks like English test team trying to bring their white ball influences to test cricket while taking their test game into a different dimension with Baz's effect.

Is this the start of a "new test cricket" ?
Time will tell. https://t.co/zzkJLOL17z

Brendon McCullum - Test cricket should be made sexy.

I really can't explain this shot. We are on a run chase and he has the audacity to pull this shot off.

Joe Root, who has already hit two centuries in the season, finished the day unbeaten on 55, while Ollie Pope was batting on 81. England were 183/2 at Stumps on Day 4, needing another 113 runs to win the match and complete a 3-0 whitewash over the Kiwis.

New Zealand had scored 329 in their first innings thanks to Daryl Mitchell's third century in as many matches this series.

However, a stunning 157-ball 162 from Jonny Bairstow and a 97-run knock from Jamie Overton on debut saw England score 360 and take a 31-run first-innings lead.

New Zealand Cricket Team England vs New Zealand, 3rd Test Cricket
Get the latest updates on IPL Auction 2023 and check out  IPL 2023 and Live Cricket Score. Like us on Facebook or follow us on Twitter for more sports updates. You can also download the NDTV Cricket app for Android or iOS.