ENG vs NZ: New Zealand all-rounder Daryl Mitchell hit Jack Leach for a six over long-on, which landed straight into a fan's glass of beer on Day 1 of the second Test against England. 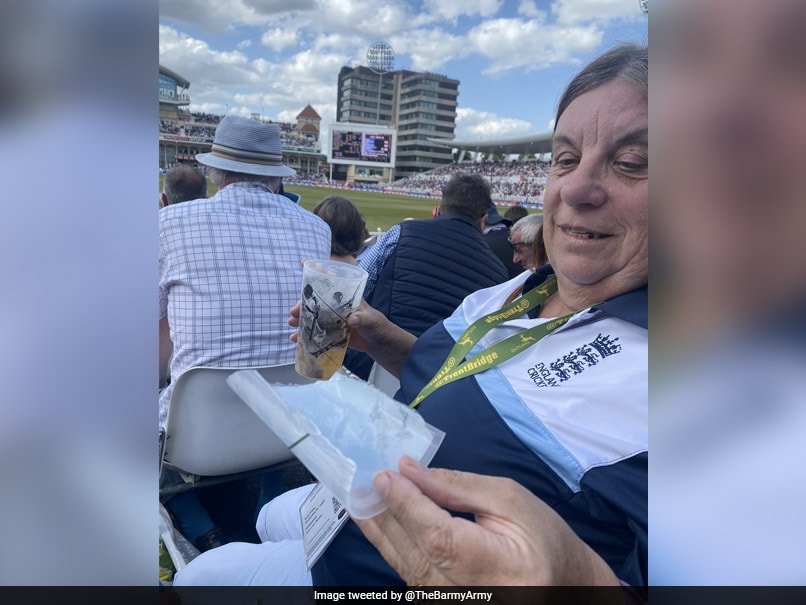 After scoring a hundred in the first Test at Lord's, New Zealand all-rounder Daryl Mitchell continued his rich vein of form in the ongoing second Test against England. Mitchell hit eight boundaries and two sixes, and was batting unbeaten on 81 before stumps were called at Trent Bridge on Day 1. Apart from entertaining the crowd with his brilliant stroke play, Mitchell also hit Jack Leach for a six over long-on, which landed straight into a fan's glass of beer. The incident happened in the 56th over of New Zealand's first innings.

The video was shared by England Cricket Board on their official Instagram handle.

A post shared by We Are England Cricket (@englandcricket)

In the video, England pacer Matthew Potts, who was deployed at long-on, can be seen gesturing to his teammates that the ball landed in someone's beer.

Susan - the lady earlier who Daryl Mitchell's pint hit - has been given a replacement by the Kiwi team #ENGvNZ pic.twitter.com/53ig2R5cML

After the close of the day's play, Mitchell went on to greet Susan and apologised for the same.

New Zealand were in command of the proceedings after being put into bat first.

Openers Will Young and Tom Latham had given the Kiwis a bright start in the opening session, adding 84 runs for the first wicket.

However, both were dismissed off consecutive deliveries by England captain Ben Stokes and James Anderson, respectively.

Henry Nicholls and Devon Conway also added 77 runs for the next wicket before both were dismissed in quick succession.

Just like the second innings of the first Test, Mitchell and Tom Blundell came to New Zealand's rescue on Day 1, adding an unbeaten 149 runs for the fifth wicket.

New Zealand were 318 for four at stumps with Mitchell and Blundell batting on 81 and 67, respectively.

Trent Bridge, Nottingham Cricket England vs New Zealand, 2nd Test
Get the latest updates on IPL Auction 2023 and check out  IPL 2023 and Live Cricket Score. Like us on Facebook or follow us on Twitter for more sports updates. You can also download the NDTV Cricket app for Android or iOS.