Hampshire eventually won the T20 Blast title against Lancashire by one run despite the last-ball drama. 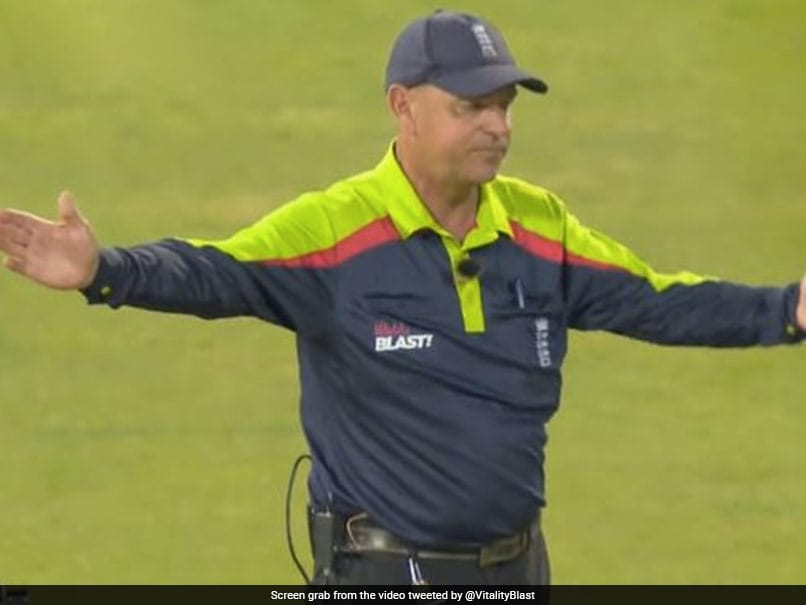 Umpire asks players to come back to their positions after a 'no-ball' in T20 Blast 2022 final match.© Twitter

The T20 Blast on Saturday witnessed one of the most bizarre incidents that can happen in the game of cricket. The drama took place in the final match of the tournament that was played between Hampshire and Lancashire at the Edgbaston in Birmingham. The nail-biting match went to the final ball where Lancashire needed five runs to win the game. This is when pacer Nathan Ellis cleaned up Richard Gleeson with a fuller length and the Hampshire players erupted in joy, thinking they bagged the title with a 4-run margin. But the umpire marred their celebration by stating that it was no-ball.

By the time the umpire announced his decision, the fireworks had already started in the stadium. Meanwhile, the entire Hampshire dressing room started celebrating while their fans complemented the moment. The Hampshire players then had to walk back to their positions for the final ball of the match.

However, all the drama couldn't hurt Hampshire's morale as the side eventually clinched the title with a one-run win over Lancashire.

The utter, utter drama of #Blast22.

Earlier, Hampshire skipper James Vince had won the toss and opted to bat first in the summit clash. The side posted 152/8 in their stipulated quota of 20 overs, courtesy Ben McDermott's 62 off 36. Meanwhile, Matthew Parkinson was the pick of the bowlers for Lancashire with figures of 4/26.

In reply, Lancashire remained one run short by ending their innings at 151/8, despite the last-over drama. Steven Croft was the top run-scorer for the side with a 36 off 25. For Hampshire, both Liam Dawson and James Fuller picked two wickets apiece.

Sponsored by Vuukle
Comments
Topics mentioned in this article
Cricket Nathan Ellis Richard Gleeson
Get the latest updates on IPL Auction 2023 and check out  IPL 2023 and Live Cricket Score. Like us on Facebook or follow us on Twitter for more sports updates. You can also download the NDTV Cricket app for Android or iOS.