Sachin Tendulkar said his suggestion that MS Dhoni go in to bat ahead of Yuvraj Singh became a tactical masterstroke for India in the 2011 World Cup final. 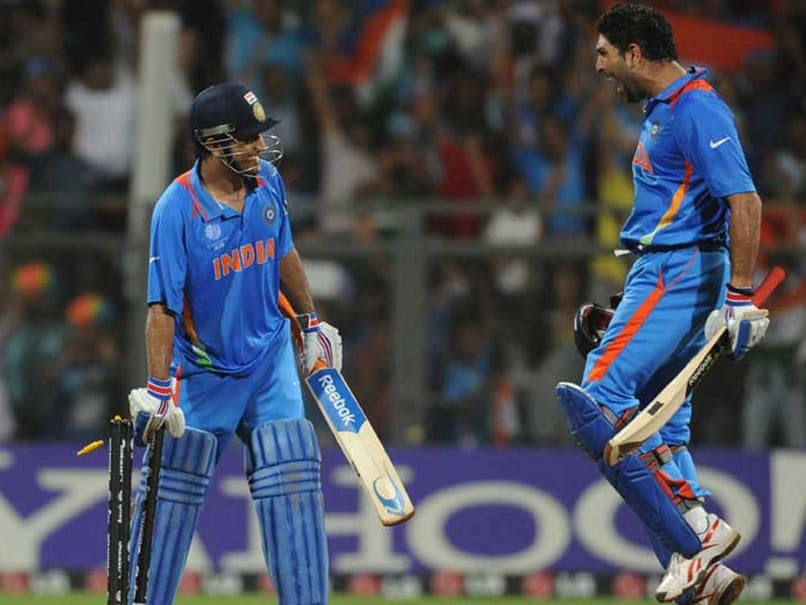 MS Dhoni and Yuvraj Singh celebrate after the former hit the winning runs in the 2011 World Cup final.© AFP

After losing the early wickets of Virender Sehwag and Sachin Tendulkar in their chase of 274 against Sri Lanka in the 2011 World Cup final, India steadied the ship through a solid partnership between Virat Kohli and Gautam Gambhir. When Kohli lost his wicket in the 22nd over, everyone expected the in-form Yuvraj Singh - who would later be named man of the tournament - to walk out to bat. But much to the surprise of the spectators and the opposition, it was captain MS Dhoni who came out to the middle instead.

The wicketkeeper-batsman had not shown great form going into the World Cup final and the decision to promote himself above the in-form Yuvraj Singh seemed baffling at the time.

But the move turned out to be a masterstroke and MS Dhoni smashed 91 off just 79 deliveries to complement Gambhir's 97 to help India lift the trophy for the second time in history.

Tendulkar and Sehwag, speaking to Times of India, recalled how the team came up with that key decision to move Dhoni up the order.

"The partnership between Gautam and Virat was flourishing and we wanted to be a couple of steps ahead of the opposition. That's when I told Viru ... 'if a left-hander (Gautam) gets out now, a left-hander (Yuvi) should go in, and if a right-hander (Virat) gets out, a right-hander (Dhoni) should go in. Yuvi was in tremendous form but Sri Lanka had two off-spinners going, so I thought a strategy change would work," Tendulkar said.

"He was right. Left-right combination needed to continue. That change in strategy completely caught the Sri Lankans off guard," Sehwag added.

"There were two quality off-spinners in the attack so a left-hand, right-hand strategy made sense. Gautam was batting brilliantly and someone like Dhoni could've kept rotating the strike. So I told Viru, 'tu overs ke beech mein sirf ye baat bahar jaake MS ko bol aur next over shuru hone se pehle waapis aaja. Main yahan se nahi hilne wala (Just go out into the balcony between the overs only to say this much to MS and come back fast before the next over begins. I'm not moving from here)," added Tendulkar, showing he was no different to the TV spectators who choose not to move from their spot when their team is doing well.

"Before he could even complete his sentence, we saw MS walking into the dressing room. So, that's when he (Sachin) repeated the same thing to MS, in front of me," Sehwag said.

"I asked MS to consider this strategy. He then went to Gary (Kirsten), who was sitting outside. Then Gary came in and all four of us got talking about it. Gary too agreed it was the right thing to do, given the attack on hand. MS also agreed and promoted himself up the order," Tendulkar said.

The decision paid off and India beat Sri Lanka by six wickets, with more than an over to spare.