Indian cricketers took to Twitter to wish Bhuvneshwar Kumar on his new innings. 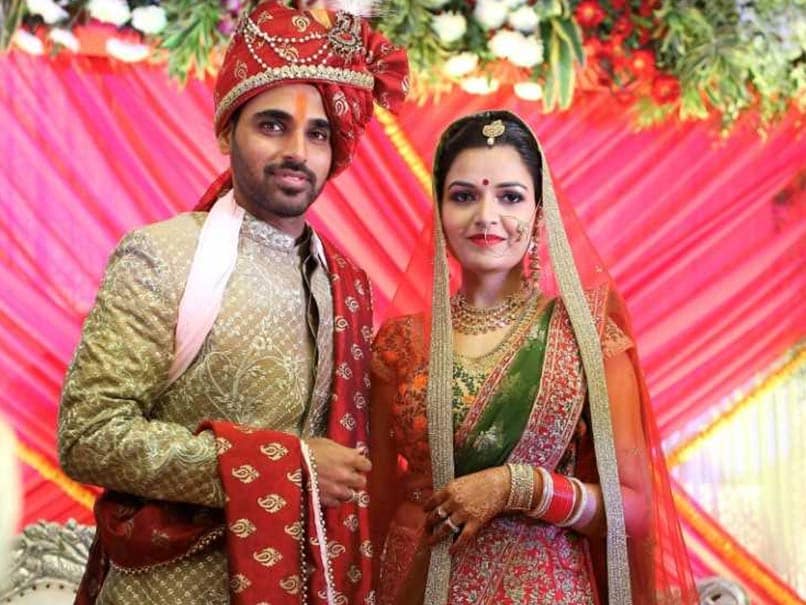 Bhuvneshwar Kumar and Nupur Nagar got married in Meerut.© PTI

Star India pacer Bhuvneshwar Kumar tied the knot with fiancee Nupur Nagar in a glittering wedding ceremony in his hometown Meerut. The wedding will be followed by a reception in Bulandshahr, Nupur's hometown, on November 26. The couple will also host a reception in New Delhi on November 30. Team India members, who will be in Delhi for the Sri Lanka series at the time, are expected to attend the reception. The celebration of the wedding had started a few days back when photos of 'mehendi' started doing rounds on different social media platforms. The couple got engaged at a ceremony in Greater Noida on October 4, which was attended by friends and family members.

Following the marriage, Indian cricketers took to Twitter to wish the pacer on his new innings. Rohit Sharma, however, made sure his fans and followers had a good laugh on the happy occasion.

Congratulations are in order for two India speedsters. Enough bowling the maiden over guys. Time for a maiden to bowl you over. Go well @BhuviOfficial and @ImZaheer God bless.

Warm wishes to @BhuviOfficial on and #nupurnagar on their wedding. A happy married life ahead to both of you.

In meerut with my brother #delighted #family #bhuvimarriage

Bhuvneshwar, who played an instrumental role in India's stellar performance with the ball in the first Test, was released from the India Test squad for the whole series that is in Nagpur for the second Test against Sri Lanka.

Earlier in the day, former India cricketer Zaheer Khan wed Bollywood actress Sagarika Ghatge in a private wedding ceremony. With the marriage date preponed to November 23, the reception will reportedly be held on November 27 in Mumbai. In April this year, Zaheer had announced his engagement to Sagarika on Twitter.

Zaheer and Bhuvneshwar are the latest cricketers to get married. Last year, Yuvraj got married to Hazel Keech while Rohit Sharma and Harbhajan Singh got married in 2015.

Comments
Topics mentioned in this article
India Cricket Team Sri Lanka Cricket Team Cricket Bhuvneshwar Kumar
Get the latest updates on ICC Women's Cricket World Cup 2022 and IPL 2022, check out the Schedule , Live Score and IPL Points Table. Like us on Facebook or follow us on Twitter for more sports updates. You can also download the NDTV Cricket app for Android or iOS.