Nathan Ellis provided another moment of brilliance in an entertaining season of the Big Bash League. 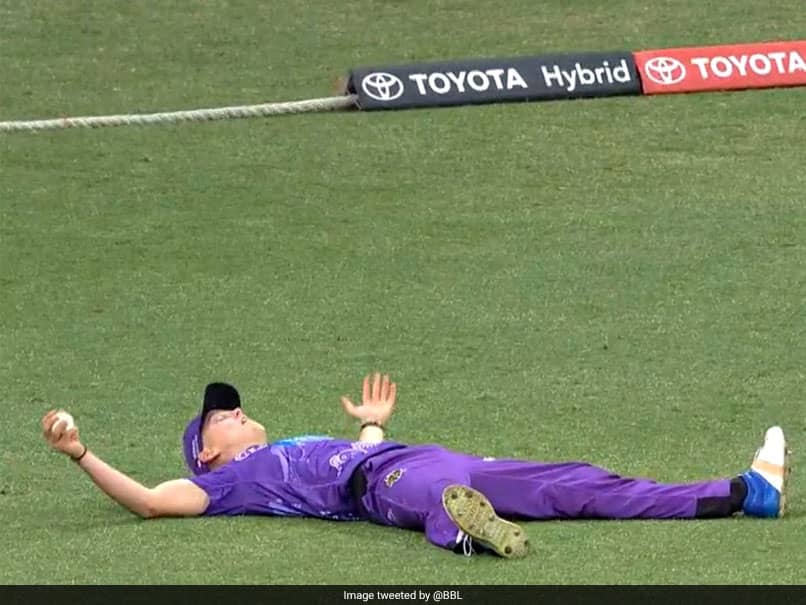 Australia's Big Bash League (BBL) produced another brilliant moment of fielding on Saturday in the match between Sydney Thunder and the Hobart Hurricanes. Hobart's Nathan Ellis showed great reflexes to hang on to a catch to dismiss Usman Khawaja after he originally misjudged the ball coming his way. Scott Boland, in the 12th over of the match at the Sydney Showground Stadium, bowled a short delivery that was met with a mistimed pull by Khawaja. The ball was straight down Ellis' throat at deep square leg and having gotten in position, the Australian bowler got down on one knee, ready to take a low catch.

But the ball was coming quite a bit higher than he expected and Ellis showed brilliant awareness and reflexes to shoot his arms up and take a catch above his head, falling back.

Nathan Ellis did not look like catching this! #BBL09 pic.twitter.com/B0J3mkN4t9

Sydney Thunders skipper Callum Ferguson chose to field after winning the toss and they restricted Hobart Hurricanes to 162/6. George Bailey top-scored for Hobart with a 30-ball 43, while Chris Morris and Daniel Sams picked up two wickets each for the Sydney team.

Usman Khawaja gave his team a good start in their chase along with fellow opener Alex Hales, who fell for a 36-ball 55 in the 11th over.

After Khawaja's dismissal for 35 in the very next over, Alex Ross guided the hosts to victory with a 22-ball 32 as they jumped to the third position in the BBL table.

The Glenn Maxwell-led Melbourne Stars are leading the table, with Sydney Thunders' local rivals Sydney Sixers close behind at second.