Evin Lewis was adjudged man of the match for scoring an explosive 89 off 36 balls. 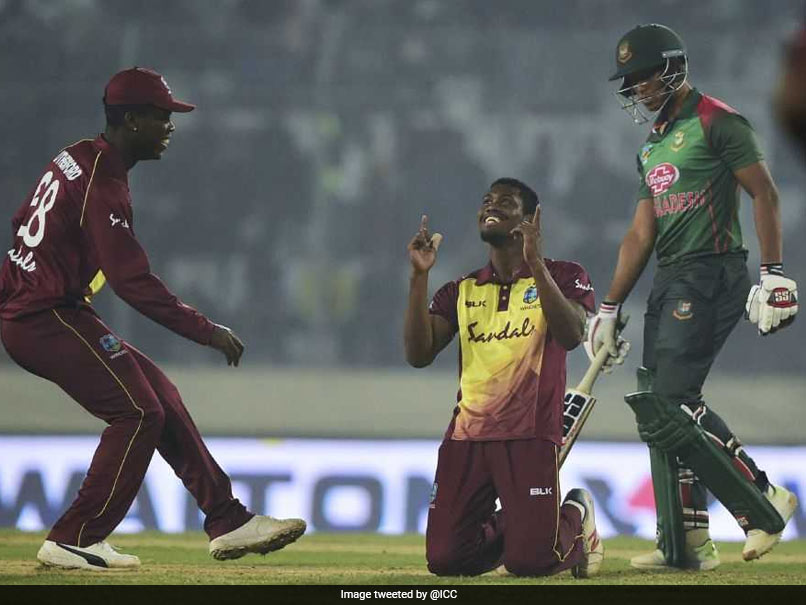 Keemo Paul registered figures of five for 15 in the final T20I against Bangladesh.© Twitter

Keemo Paul grabbed a record 5-15 and Evin Lewis smashed 89 off 36 balls as the West Indies beat Bangladesh by 50 runs in the third and final Twenty20 in Dhaka on Saturday to win the series 2-1. Lewis guided West Indies to 190 in 19.2 overs despite a late fightback by Bangladesh led by Mahmudullah Riyad, Mustafizur Rahman and Shakib Al Hasan, who claimed three wickets each. Paul then posted the best-ever T20 figures for a West Indies bowler to help the visitors bowl out Bangladesh for 140 runs.

Opener Liton Das, Bangladesh's highest scorer with 43 off 25, gave the hosts a strong start but they lost their way after an umpiring gaffe appeared to have broken their concentration.

In the fourth over of the innings, Bangladeshi umpire Tanvir Ahmed called a no-ball when Liton spooned a catch to Shimron Hetmyer at mid-off.

The West Indies skipper immediately asked for a review, which halted the game for nearly 10 minutes.

Match officials eventually upheld the decision of umpire Ahmed after long discussion, but Bangladesh collapsed and were soon all out in 17 overs.

"I am very happy. We wanted to be aggressive and we wanted to be positive. In all three matches, we have batted really well," Brathwaite said.

"The way we came back with the ball was terrific. I think it was... (a) 180-run wicket. With the bat we were not sure how to go about our business," he said.

Earlier, Lewis set the West Indies up for victory with a blistering innings, which included six fours and eight sixes -- four of the sixes in one over -- until he was dismissed by Mahmudullah.

Sent in to bat by Bangladesh, openers Lewis and Shai Hope put on 76 runs in just five overs for the visitors before left-arm spinner Shakib and pace bowler Mustafizur struck.

Shakib bowled Hope for 23 while Mustafizur removed Paul for two, but Lewis continued his onslaught, racing to 50 off just 18 balls.

Mahmudullah, who finished with 3-18, trapped Shimron Hetmyer leg-before for a duck right after he bowled Lewis, slowing the West Indies scoring spree.

Nicholas Pooran added 29 off 24 balls down the order but Bangladesh did well in the final overs to contain the tourists.

Mustafizur Rahman claimed 3-33 and Shakib finished with 3-37 in the Bangladesh fightback.

Shakib Al Hasan Cricket Bangladesh vs West Indies, 3rd T20I Mustafizur Rahman
Get the latest updates on ICC T20 Worldcup 2022, check out the Schedule and Live Score. Like us on Facebook or follow us on Twitter for more sports updates. You can also download the NDTV Cricket app for Android or iOS.