Australia Women's captain Meg Lanning was saved by the stump mic as she attempted to take a quick single down to mid-off in the tri-series final against India. 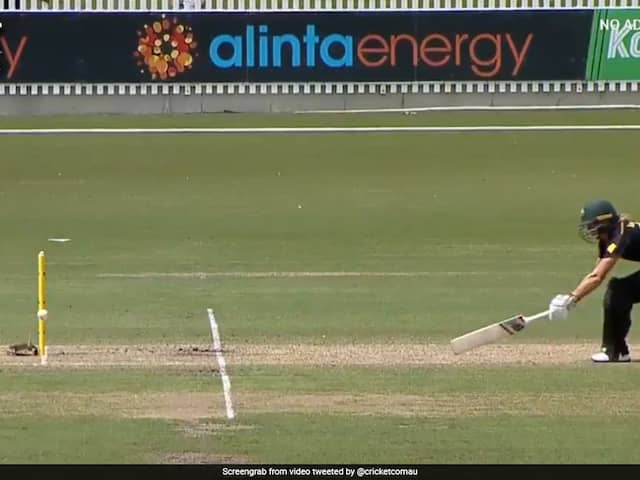 Meg Lanning was saved by the stump mic during the tri-series final against India.© Twitter

Australia women's team defeated India in the tri-series final on Wednesday. During the match, Australia captain Meg Lanning got a lucky reprieve as the stump-mic came to her rescue. In the 14th over, Meg Lanning went for a quick single but the ball went on the bounce to Shikha Pandey at mid-off who had a shy at the stumps. The ball was on course to hit the stumps but the throw hit the stump-mic wire and changed course, missing the wicket. Meg Lanning was quick to capitalise on the opportunity to sneak in an extra run. Cricket Australia took to Twitter to share the video of the 'rare' incident on the field.

Here is the video of the unusual incident:

Another example of technology saving the batter!

Earlier, Australia won the toss and opted to bat against India in the summit clash.

Beth Mooney's unbeaten 71 helped Australia Women to a competitive total of 155 for six.

For India, Deepti Sharma was the pick of the bowlers who registered figures of three for 30 from her four overs.

Chasing 156 for the win, India got off to a poor start as Shafali Verma was sent packing in the second over by Tayla Vlaeminck.

Young batter Richa Ghosh then steadied the ship with Smriti Mandhana as the duo put on 43-run stand for the second wicket.

Annabel Sutherland removed Ghosh for 17 but Mandhana held her end and went onto to score her 12th T20I half-century.

India were 113 for four after 14 overs, needing 43 off the last five overs with captain Harmanpreet Kaur and Mandhana out in the middle.

Once Mandhana lost her wicket, Indian team suffered a shocking batting collapse and eventually fell 11 runs short of the target.

Australia Women Smriti Mandhana Shikha Pandey Meg Lanning Cricket
Get the latest Cricket news, check out the India cricket schedule, Cricket live score . Like us on Facebook or follow us on Twitter for more sports updates. You can also download the NDTV Cricket app for Android or iOS.