Watch: TV Umpire Comes To Smriti Mandhana's Rescue After Being Given Out By On-Field Umpire In 1st T20I vs England

Smriti Mandhana was given out by the on-field umpire but the TV umpire intervened to overturn the decision. 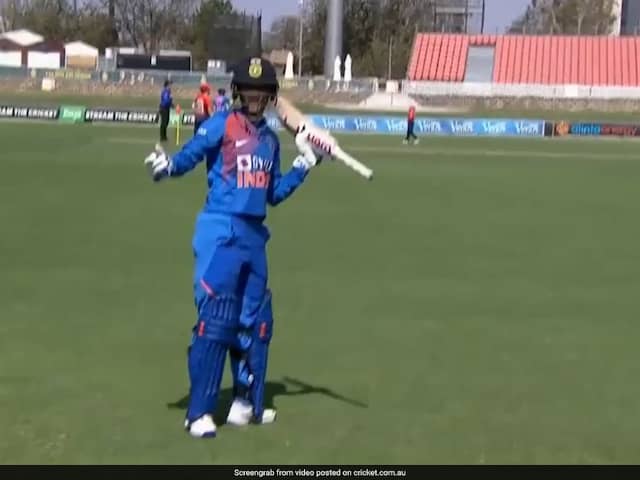 Smriti Mandhana scored 15 runs in the first T20I vs England.© Screengrab from video posted on cricket.com.au

Smriti Mandhana was saved by the TV umpire in the ongoing first Twenty20 International (T20I) between Indian women's cricket team and England in Canberra on Friday. In the second over of India's chase, Smriti Mandhana edged the ball to the wicketkeeper. Amy Ellen Jones initially caught the ball but as she was rolled over and was in the process of getting up, the ball which was not in full control of the wicketkeeper, popped out of the left glove. The on-field umpire gave Smriti Mandhana out and as she was about to cross the boundary line, the TV umpire intervened and overturned the decision in favour of the Indian batter. The ICC took to Twitter to share the video of the dropped chance.

Smriti Mandhana was given out but the decision was later overturned.

India are 22/0 after two overs and need 126 more to win.#ENGvINDpic.twitter.com/tusTTxfvtF

In the match, Harmanpreet Kaur won the toss and invited England to bat at the Manuka Oval.

Heather Knight then scored a half-century along with a handy contribution from Tammy Beaumont to take her side to a challenging total of 147 for eight.

In reply, India got off to a flying start scoring 22 runs in the first two overs.

Natalie Sciver struck in her first over to eventually send back Mandhana for 15 and give England their first breakthrough.

Shafali Verma failed to capitalise on the good start she got as she was sent packing by England captain Heather Knight for 30.

Jemimah Rodrigues scored a 20-ball 26 before being dismissed by Katherine Brunt in the 11th over.

India captain Harmanpreet Kaur remained unbeaten on 42 and finished the game with a six off Katherine Brunt in the last over to help India register a five-wicket win.

England Women Smriti Mandhana Harmanpreet Kaur Heather Knight Katherine Brunt Cricket
Get the latest Cricket news, check out the India cricket schedule, Cricket live score . Like us on Facebook or follow us on Twitter for more sports updates. You can also download the NDTV Cricket app for Android or iOS.