AUSW vs INDW: The one-off Test between India women and Australia women ended in a draw 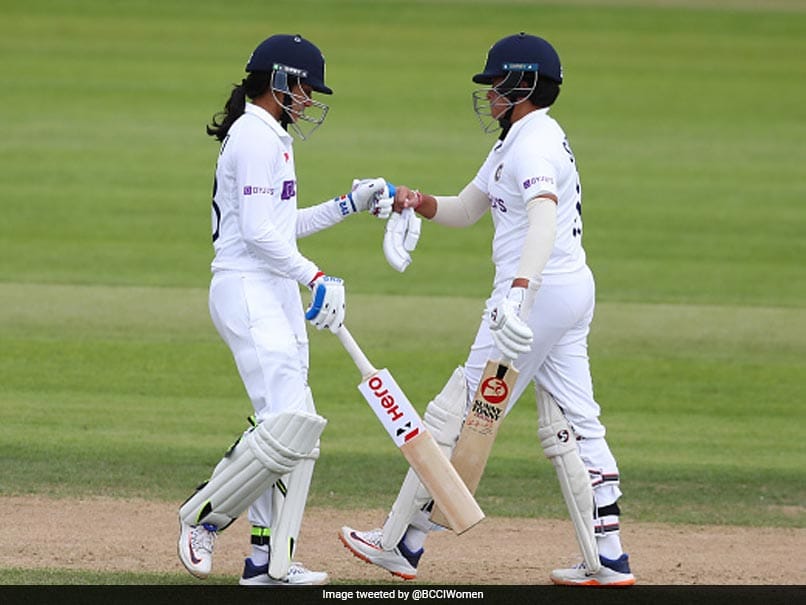 AUSW vs INDW: Smriti Mandhana and Shafali Verma during the one-off Test vs Australia women.© BCCI/Twitter

The pink ball Test between India women and Australia women ended in a draw on Sunday. The match, marred by numerous rain interruptions, saw Indian batter Smriti Mandhana score a scintillating century in the first innings to help the visitors post a huge total of 377/8. In reply, Australia declared their first innings on 241 for nine. Pooja Vastrakar was the pick of the bowlers for India, finishing with figures of three for 49. Indian openers Mandhana and Shafali Verma again gave the visitors a good start in their second innings, stitching together a 70-run stand for the first wicket. Mandhana departed for 31 while Shafali went on to score her half-century. India women's team declared their second innings at 135 for the loss of three wickets to set Australia a target of 272 runs. Jhulan Goswami dismissed Alyssa Healy for six to give India an early breakthrough in the final stages of the one-off Test. India struck again as Beth Mooney was caught off Pooja Vastrakar for 11. Both captains shook hands to end the match in a draw.

Australia Women Live Score Live Cricket Score Australia Women vs India Women, One-off Test Cricket
Get the latest updates on ICC T20 Worldcup 2022 and CWG 2022 check out the Schedule, Live Score and Medals Tally. Like us on Facebook or follow us on Twitter for more sports updates. You can also download the NDTV Cricket app for Android or iOS.