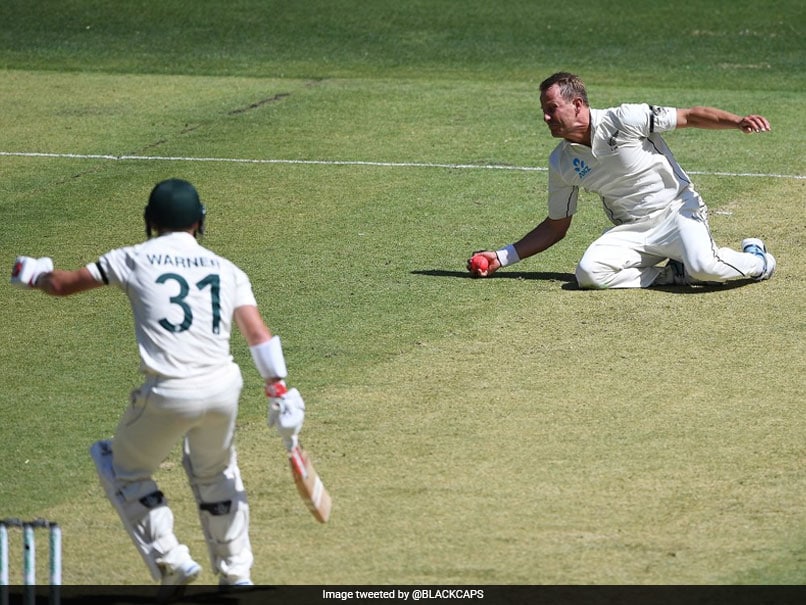 New Zealand fast bowler Neil Wagner produced a special effort on the field to get rid of David Warner who was looking set at 43 on the first day of the first Test between Australia and New Zealand. Neil Wagner, bowling his sixth over in the innings, bowled a full pitched delivery which Warner lobbed straight towards the bowler. The ball was dipping on Wagner, but the fast bowler slid in his follow through and completed a stunning one-handed return catch. Cricket Australia's official Twitter handle posted a video of Wagner's caught and bowled and termed it as "one of the best catches."

In the match, Australia captain Tim Paine won the toss and opted to bat.

David Warner and Joe Burns got Australia off to a cautious start before Colin de Grandhomme trapped Burns right in front of the stumps for nine to give visitors the first breakthrough.

The replays showed that the ball would've missed the leg stump, but Burns decided not to go for the review.

Just before the tea interval in the day-night Test in Perth, Wagner's one-handed catch accounted for David Warner.

Australia went into the break at 76 at the loss of two wickets with Marnus Labuschagne batting on 15 and Steve Smith not out on zero.

Both teams observed a minute's silence before the start of the match and are wearing black armbands in memory of the people who lost their lives in the Whakaari volcano tragedy.