Kane Williamson tapped the ball to cover and ran for a single, but a mix-up with Devon Conway meant he was stranded in no-man's land and tried to run back 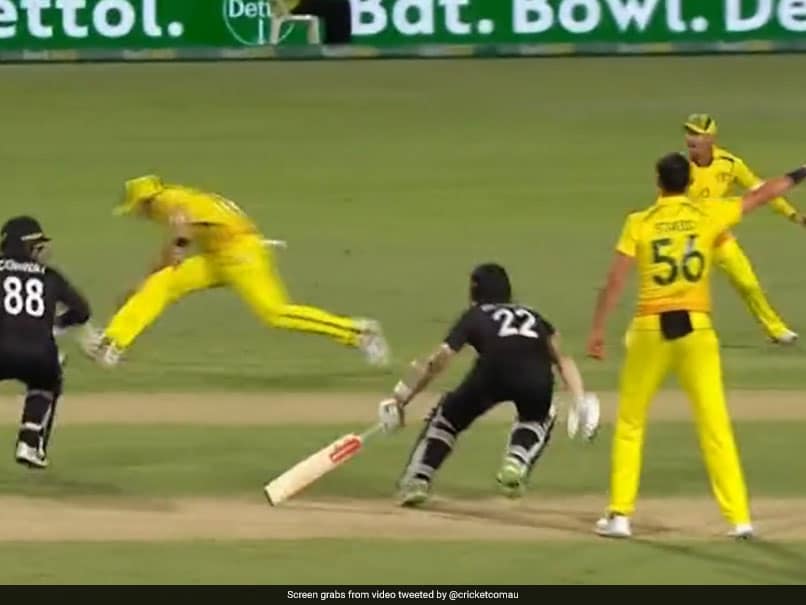 Despite the fumble, Kane Williamson would have been caught outside the crease.© Twitter

Australia beat New Zealand in the 2nd ODI on Thursday to take an unassailable 2-0 lead in the three-match series. While they bowled New Zealand out for a paltry total of 82 to register a 113-run win, they did miss a golden run out opportunity early on in the visitors' innings. Defending 196, Mitchell Starc gave Australia the perfect start with the ball as he had Martin Guptill out in the first over. The very next delivery could have led to another dismissal, but Australia fluffed their lines.

Kane Williamson tapped the ball to cover and ran for a single, but a mix-up with Devon Conway meant he was stranded in no-man's land and tried to run back.

It would have been an easy dismissal, but Sean Abbott, running to his right from point, couldn't pick the ball up at the first go. Despite the fumble, Williamson would have been caught outside the crease as Abbott picked the ball up on the second time of trying and threw it to wicketkeeper Alex Carey, but the gloveman collected the ball in front of the stumps and tried to immediately throw it behind him at the stumps and missed, allowing the New Zealand skipper to get back safely.

New Zealand had started brilliantly with the ball and they ran through Australia's batting order, but Steve Smith's 61 and good rearguard resistance from Mitchell Starc, Adam Zampa and Josh Hazlewood took the hosts to 195/9 in 50 overs.

New Zealand lost Guptill early and despite attempts to consolidate and build partnerships, wickets kept falling and Australia ended up bowling them out for 82 in 33 overs.

Adam Zampa returned career best figures of 5/35, while Starc and Abbott picked up two wickets apiece. Marcus Stoinis also claimed one wicket as Australia sealed the series with a match to go.

Alex Carey Cricket
Get the latest updates on Fifa Worldcup 2022 and check out  Fifa World Cup Schedule, Stats and Live Cricket Score. Like us on Facebook or follow us on Twitter for more sports updates. You can also download the NDTV Cricket app for Android or iOS.