Abu Dhabi T20: Lendl Simmons remained unbeaten on 46 off 27 balls as Northern Warriors chased down the 115-run target with two balls to spare and reached the final. 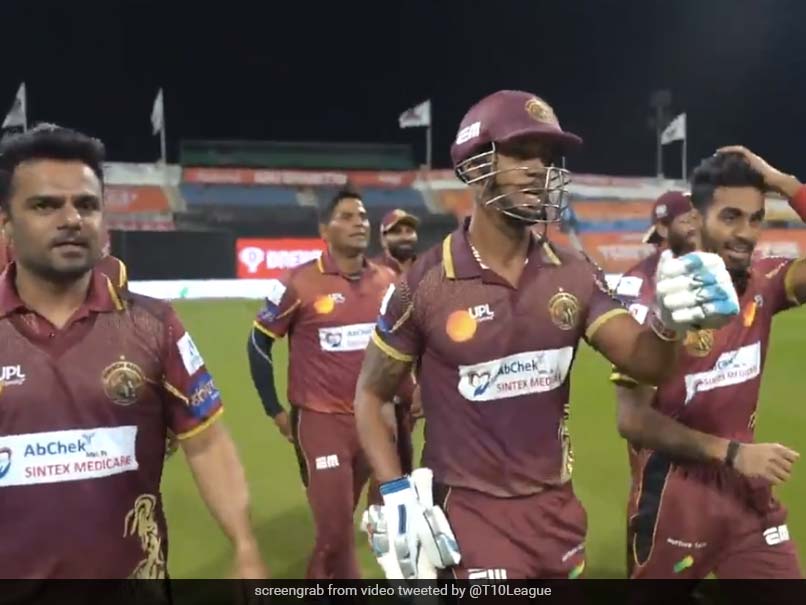 Earlier, Abu Dhabi had posted a challenging 114 for 7 through Paul Stirling's quick 48 off 13 balls with six sixes and three boundaries. If not for Fabian Allen's deadly four-wicket spell for 13 runs, Abu Dhabi could have posted a bigger total.

Warriors won the toss and elected to field. Stirling gave Abu Dhabi a breezy start hitting Wayne Parnell for three consecutive sixes off the last three deliveries of the first over. Stirling was severe on Junaid Siddique too, hitting him for two boundaries and two sixes in the second over.

Rayad Emirit, who bowled the third over was also hit for two boundaries and a six by Stirling before he fell to the last ball of that over. Waseem Muhammad at mid-off took a tumbling catch to end Stirling's knock of 48 from 13 balls.

Siddique picked the prize wicket of Gayle, caught at long-on by Fabian Allen for 7. That brought in Ben Duckett, who had scored a stubborn unbeaten 27 in the previous match to ensure his team's victory against Qalandars. He hit Mahesh Theekshana for two consecutive boundaries in the fifth over. At the halfway mark, Abu Dhabi was 70 for 2.

In the sixth over, Allen got Duckett brilliantly stumped by wicketkeeper Pooran for 11. Najibullah Zadaran too hit Allen high to Parnell at the cover-point for 6. The fall of two quick wickets and a tight seventh over from Theekshana, giving away just four runs, reduced the run flow.

Joe Clarke hit Emrit for a six over backward square leg, When Jamie Overton too hit two successive boundaries, Abu Dhabi went past the 100 run mark in the eighth over. Waseem took another well-judged catch at long-on to end Overton's knock of 15 runs. With the next ball, Allen clean bowled Clarke for 16. Dhananjaya Lakshan, who bowled the last over, gave away just seven runs and also picked the wicket of Rohan Mustafa with the last delivery.

Chasing a run rate of 11.40 meant that Warriors needed a quick start. Simmons, who opened the batting, top-edged and escaped being caught and bowled off the fifth ball by Tom Helm. Waseem cracked a fluent boundary through extra cover off Rohan Mustafa but lifted the next ball straight to Naveen Ul Haq for 10. Naveen then went on to take the prize wicket of Nicholas Pooran caught behind by Duckett for a duck. Jamie Overton gave away nine runs in the fourth over. Obed McCoy too bowled a tight fifth over giving away just four runs and the pressure for runs began to mount. Warriors needed 76 runs from the last five overs.

Simmons and Rovman Powell hit one boundary each off Mustafa's sixth over. Naveen once again bowled tightly giving away only two boundaries. With 49 runs needed off the last three overs, both batsmen struggled to force the pace and the asking rate kept mounting. Powell hit Overton for boundary and six in the eight over. This reduced the target to 34 from 12 balls.

Simmons pulled McCoy for a six and this was followed by substitute fielder Kaushal Malla dropping Simmons at deep square leg. Powell hit McCoy to long-on to reduce the target to a gettable 16 runs from seven balls but McCoy clean bowled Powell for 49 with the last ball of the ninth over.

Warriors needed 16 runs off the last six balls and Helm began the last over by bowling a wide.

Simmons pulled Helm for a six. He then got two runs off the next ball and pulled the fourth delivery for a six to equal the score. Helm again bowled a wide delivery and Warriors won the match to sail into the final.

Sheikh Zayed Stadium, Abu Dhabi Cricket
Get the latest updates on ICC T20 Worldcup 2022 and CWG 2022 check out the Schedule, Live Score and Medals Tally. Like us on Facebook or follow us on Twitter for more sports updates. You can also download the NDTV Cricket app for Android or iOS.