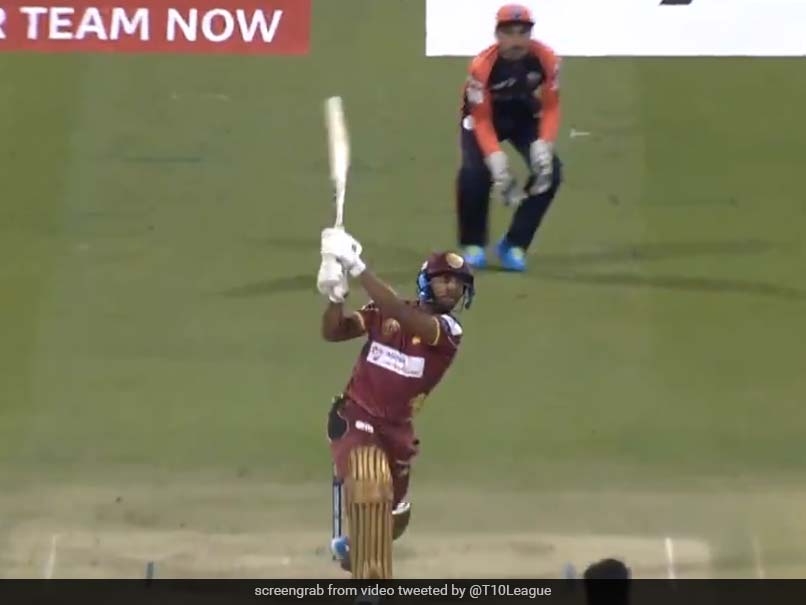 Nicholas Pooran's breezy half-century and Wayne Parnell's hat-trick helped Northern Warriors register a 32-run victory over Delhi Bulls in the Abu Dhabi T10 on Saturday. Warriors posted the highest total of this season when Nicholas Pooran hit a quick-fire 54 off 21 balls with five sixes and as many boundaries. Rovman Powell and Fabian Allen maintained the momentum with unbeaten knocks of 24 and 28 runs respectively to boost the total.

Delhi started the mammoth chase with Ravi Bopara hitting a quick 36 off 15 balls with four sixes and two boundaries. But Parnell's hat-trick in the ninth over put the breaks on Delhi innings. It was the fourth hat-trick in this tournament's history.

Delhi Bulls followed the usual trend of winning the toss and electing to field. Waqas Maqsood who opened the bowling, produced a maiden over. Northern Warriors' openers Brandon King and Lendl Simmons could post only 10 runs between them.

In the second over, Maqsood picked the price wicket of Simmons by having him caught at long-on for a duck. Simmons had cracked an unbeaten 54 in his last match against Maratha Arabians. Maqsood's figures read two overs, one maiden, one run, and one wicket.

From the third over, Nicholas Pooran, who joined King, began to hit out. He smashed Mohammad Nabi for two sixes and a boundary.

Fidel Edwards, who bowled the next over, wavered in his line and length and also bowled no balls to help King and Pooran notch 20 runs off that over. King fell to the first ball of the sixth over when Ali Khan had him caught by Ravi Bopara at long on for 18.

Pooran smashed the next ball for a boundary through the covers and followed it by hitting two sixes. The first six was hit over backward point and the second went roaring over long-off.

Skipper Dwayne Bravo introduced himself in the eighth over and had Pooran out, caught by Bopara at backward point for 54. Next man Fabian Allen picked three consecutive boundaries off Bravo. Rovman Powell and Allen kept picking boundaries to steer the total past the 100 run mark in 8.3 overs. Edwards was hit for 22 runs in his ninth over.

In the last over, Allen hit Bravo's second delivery for a six to mid-wicket. Powell too hit the last ball for a six and the pair picked up 23 runs from that last over.

Delhi Bulls began their chase through Rahmanullah Gurbaz and Evin Lewis. Their experienced Pakistan pacer Wahab Riaz gave away just six runs from his first over. Lewis, after hitting Siddique for a boundary to fine leg, hit Rayad Emrit for a six to long-off in the next over.

Emrit then clean bowled Gurbaz for 15 in the fifth ball. Riaz was introduced in the fourth over and he picked the wicket of Lewis by having him caught at mid-on for 13. Adam Lyth joined Bopara and together they hit Sri Lankan medium-pacer Dhananjaya Lakshan for 13 runs in the fight over.

With 85 runs to get from the last five over, Northern Warriors introduced South African pacer Wayne Parnell into the attack. Bopara hit Parnell for a six over mid-wicket.

Emrit struck again in the seventh over to have Lyth caught at mid-wicket for 13. When Bopara too fell in the eight over to Lakshan when he hit high to Siddiqui at short fine leg, Delhi's hopes soon began to fade.

Parnell clean bowled Sherfane Rutherford and Dwayne Bravo in successive balls and completed his hat-trick when he trapped Ali Khan leg before. Ultimately Delhi could muster only 105 for 7 in their ten overs.

Sheikh Zayed Stadium, Abu Dhabi Cricket
Get the latest updates on ICC Women's Cricket World Cup 2022 and IPL 2022, check out the Schedule , Live Score and IPL Points Table. Like us on Facebook or follow us on Twitter for more sports updates. You can also download the NDTV Cricket app for Android or iOS.