Abu Dhabi T10: Delhi Bulls captain Dwayne Bravo led from front as his side defeated Northern Warriors by five wickets in the first qualifier to book a spot in the final. 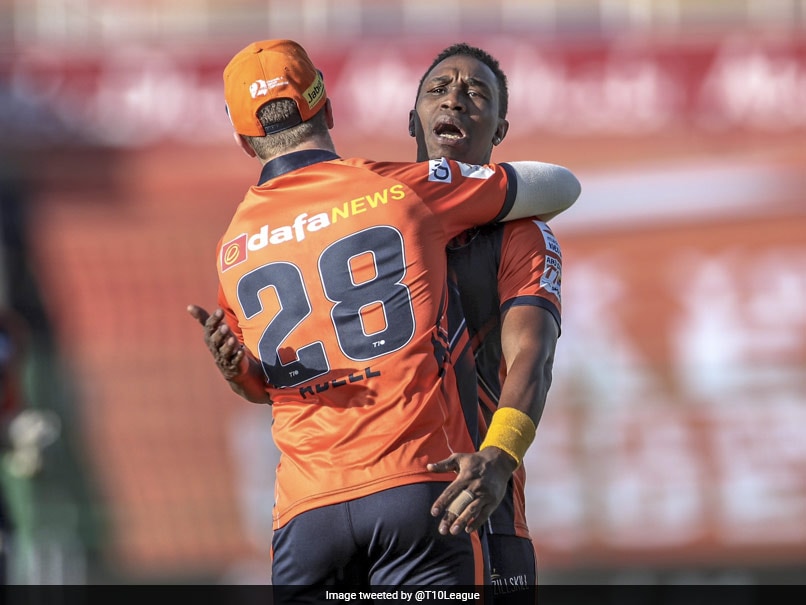 Abu Dhabi T10: Dwayne Bravo returned with the figures of two for 14.© Twitter

Delhi Bulls captain Dwayne Bravo, Waqas Maqsood and Nyeem Young destroyed the strong Northern Warriorsbatting to restrict them to 97 for 7 and place their team in the final of the Abu Dhabi T10at the Sheikh Zayed Cricket Stadium in Abu Dhabi on Friday. Bravo, who had captained Maratha Arabians to title triumph in the last edition, took the important wickets of Warriors skipper Nicholas Pooran and aggressive Lendl Simmons and returned with the figures of two for 14. He was backed by Maqsood with two wickets for 24 runs and Nyeem Young also picked up two wickets conceding 22 runs.

Chasing the moderate target, Sherfane Rutherford through a breezy 29 off 10 balls and Tom Abell's 11-ball unbeaten 23 ensured Bulls a five-wicket win with eight balls to spare in the first qualifier.

Warrior's UAE medium-pacer Junaid Siddique bowled brilliantly to take four wickets for 20 runs but Abell and Ravi Bopara (15*) held on to steer their team safely to the target.

Delhi Bulls picked an early wicket after opting to bowl. Maqsood with the second ball of the first over clean bowled Brandon King (2). Pooran began in his usual style by going for the big shots right away. He hit the first three balls he faced from Maqsood for boundaries. Waseem Muhammad hit a boundary through covers off Fidel Edwards in the second over while Pooran hit the fifth and six deliveries of that over for sixes.

Maqsood struck again with the first ball of the second over by forcing Waseem (5) to edge to wicketkeeper Rahmanullah Gurbaz. Pooran hit Maqsood over the square leg for another six. Off the last ball of that over, Rovman Powell got run out for 1 to a direct hit by Sherfane Rutherford at backward point to the wicketkeeper's end. Powell, who had remained unbeaten six times consecutively in this tournament got out for the first time.

Bravo then introduced himself and picked the prize wicket of Pooran by having him caught at long-on by Tom Abell for 32 from just 12 deliveries. Bravo also bowled a tight fourth over giving away just six runs. The fifth over from Shiraz Ahmed was tighter giving away just three runs. At the halfway, Warriors were struggling at 51 for 4.

Lendl Simmons hit the first ball of the sixth over from Young for a six to deep backward point. He also hit the second delivery to backward square leg for a boundary. Young dismissed Fabian Allen and with this, half the Warriors' side were back in the dug-out for 62.

Simmons could get only one boundary from the accurate Shiraz in the seventh over. Bravo also removed the dangerous Simmons in the eighth over by having him caught at covers for 19. He then caught Wayne Parnell on 13 at long-on off Young in the last over.

Siddique struck back having Lewis caught at deep mid-wicket for 10 and also had Gurbaz caught at the same position for 14. Rutherford began by lifting Wayne Parnell for a six over long-on. He repeated the same shot off the third ball to get another six. He went on to hit Parnell for two consecutive boundaries off the last two balls to take 23 runs off that over.

Rutherford then carved an upper cut off Siddique over backward point for a six. Rutherford got out after scoring 29 runs. Siddique also dismissed Mohammad Nabi, who managed to score just one run. Rayad Emrit gave away just three runs and at the halfway mark, the Bulls were 60 for 4 needing another 38 runs from the last five overs.

Abell joined Ravi Bopara, and together they took up the challenge. Abell first hit Parnell for a six to mid-wicket. He then hit Parnell for two consecutive boundaries to place Bulls close to the target. Bopara finished off in style by hitting Allen for a six over long-off to put his team into the final. Abell hit an unbeaten 23 while Bopara remained unbeaten on 15.

Sheikh Zayed Stadium, Abu Dhabi Cricket
Get the latest updates on IPL Auction 2023 and check out  IPL 2023 and Live Cricket Score. Like us on Facebook or follow us on Twitter for more sports updates. You can also download the NDTV Cricket app for Android or iOS.